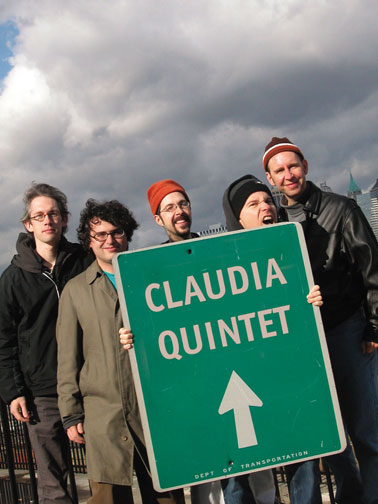 slideshow
Over the years, various musicians have gone out of their way to prove that jazz can have a sense of humor. The most obvious example is Horace Silver's 'Jazz Has a Sense of Humor.' And, of course, there was Slim and Slam with their playful mugging back in the old days when jazz was popular music. More recently, there's been folks like Matt Wilson, whose been known to don a costume for a mid-set heavy metal tribute. While his large ensemble, which released the excellent 'Eternal Interlude' in late 2009, leans more classical and big-band jazz, John Hollenbeck infuses his sublime music with a wicked sense of humor in The Claudia Quintet.

Featuring the somewhat unusual instrumentation of vibraphonist Matt Moran, reedist Chris Speed, bassist Drew Gress, accordionist Ted Reichman and Hollenbeck on drums, the five-piece band comes off as a sort of music conservatory version (a grant is acknowledged in the liner notes) of the post-rock band Tortoise. But whereas that band can be willfully obscure, or at least mute, onstage, Hollenbeck and Co. tend to keep it light.

Take, for example, Hollenbeck's explanation for the title to the band's latest, 'The Royal Toast': “I love toast!" he wrote, exclamations and all, via e-mail recently. “Many establishments seem to downgrade toast by using bad bread. So I'm single-handedly trying to escalate the status of toast by publishing the word royal with it. It works (royal jelly, royal academy, etc.)!"

You can't argue with Hollenbeck's logic--nor with the fact that 'Royal Toast' continues to maintain the high standards for a band that been acclaimed since it issued its first album in 2002. The album also features the considerable talents of keyboardist Gary Versace. This seems to contradict the concept of “if it ain't broke don't fix it," but Hollenbeck has his reasons for adding someone to the 12-year-old band.

“Gary is the only person to substitute in the band on two axes [accordion and keyboard bass]," he points out. “I love Gary and the energy he brings. He fits in perfectly, and it is nice to have another 'percussion' instrument. Plus, Gary is someone with a more 'jazz aesthetic,' which is something we are more interested in now than in the past."

Rather than just appearing on a few tunes, Versace is completely integrated into the entire set. He provides strong harmonic and rhythmic support, soloing and just generally tears at the musical concept of each song. While that may be considered the “jazz aesthetic" Hollenbeck is looking for, the pianist generally manages the magical trick of filling in some holes while not cluttering things up.

The material on 'Royal Toast' ranges from the powerfully melodic 'Keramag' and the romantic ballad 'Crane Merit' to the playfully bombastic 'Armitage Shanks.' 'Sphinx' opens with a bass solo that has a looping rhythm with a jarring series of harmonic counterpoints, which gives away to swirling Philip Glass-like triplets before circling back. It's the best song here, if only because it perfectly sums up the mix of energy, intelligence and ambition of the band. Also noteworthy is the whimsical 'Ideal Standard,' which manages to stand out by grabbing the head and heart in equal measures.

Another new wrinkle this time around is the use of interludes that feature solo turns from each of the band members. According to Hollenbeck, “I thought it might be nice if they 'introduce' the song. They are bridges--but more about the next song as opposed to the last song. I also felt it was a way to show the connectedness between the songs."

As a composer and a bandleader, it would have been easy for Hollenbeck to fall into the trap of getting a sound and then doggedly sticking to it, leaving the improvisations as the place where new ideas emerge. Not so with Claudia Quintet. Here, the band builds on the common language it's created, but there is no sense of complacency. Perhaps it doesn't always sound as organic as some bands, but there is never a moment where they aren't being playfully inquisitive as they bounce ideas around.

Of course, the aforementioned humor is always there, as well. Just look at the band's name. “I named it after a real woman who I met for five minutes about 14 years ago," Hollenbeck explains, adding, “she is a lucky woman and she doesn't even know it." It's altogether fitting, because playful wit is the name of the game with this band.