Hearing the Shai Maestro Trio is like awakening to a new world: a world of wonders, excitement, beauty, and uncertainty. --Dan Bilawsky, AllAboutJazz.com 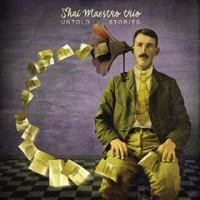 “He's developed on the piano a fluidity and hot intensity normally found in molten lava, with rapid improvisatory ideas spewing as if shot out of a volcano. Maestro's third album as a leader, features his current trio of bassist Jorge Roeder and drummer Ziv Ravitz. The band is a welcome and entry into the hallowed hall of important piano trios in jazz." —Gary Fukushima, LA Weekly

“...You owe it to yourself to discover the beauty that Maestro, Roeder and Ravitz make." —Peter Hum, The Ottawa Citizen

“Maestro's classical touch retains an expressive delicacy whatever the mood . . . His solo career is going to be one to watch." —John Fordham, The Guardian

Shai Maestro is a creator of moods, a shaper of atmospheres and a sculptor of sound. The pianist doesn't merely play music; he creates a world that is distinctly and intimately his. On his new recording, Shai Maestro Trio—Untold Stories, available on Motema Music today, August 28, 2015, Maestro, and his trio featuring Jorge Roeder (bass) and Ziv Ravitz (drums), explores a touching and poetic universe of music. Untold Stories contains all that is great in modern jazz today, and truly displays the camaraderie and brotherhood in music that this trio possesses.

As a pianist and composer Maestro has been chasing down beauty his entire life, looking to capture meaningful phrases that are refined, and clearly communicated. With Untold Stories, the third album from his trio, Maestro has turned the page and entered a new phase, taking time, fearing less, daring more, accepting the occasional stumble, and allowing the music to change and be a representation of who the members of the trio are as people, for good or bad. Maestro elaborates, “What happened to us on the road in the last few years is basically a shift in our state of mind. What I want to do today (and also to hear from other musicians as well) is to express who I am, and who we are as human beings. Being human is a complex thing to say the least, and there are many sides to our personalities. Not all are beautiful. So music can and should contain everything; beauty, ugliness, love, violence, etc. So Untold Stories is a point in time of us, an entry into a different journey, one that is much more raw and honest then what I have done so far." The music on Untold Stories was recorded live and in studios in Brooklyn and Paris, offering the listener a complete picture of the Trio today ("Maya's Song"-studio-Paris, “Treelogy", “Painting", “Elusive" & “Looking Back (Quiet Reflection)"-live-Paris, “When You Stop Seeing", “Endless Winter" & “Shades"-studio-Brooklyn).

Untold Stories opens with the compelling triumph, “Maya's Song", co-written by Maestro, Roeder and Ravitz while preparing music for a tour. “When You Stop Seeing"was inspired by a poem Maestro received from a dear friend. The poem speaks about a transparent bubble floating in space. Maestro elaborated, “this idea of transparency fascinated me and I tried to look for a transparent harmonic quality which is how I got to the texture of the song, which is a chord that is made out of 5ths. It's neither major nor minor." This composition was written during the last armed conflict between Israel and Palestine. “As an Israeli, I was born into this realty of conflict and that's the only thing I knew until I started traveling and eventually moved to New York. During the horrible violence of this last 'round' between Israel and Palestine, I was exposed to the voices coming from within Israel and Palestine via social media etc. One of the things that really bothered me is how people referred to people on the other side as, 'The Palestinians', or 'The Israelis'. We know this reality very well here in the U.S. with racism, sexism etc., and I feel that people forget that we are human beings before belonging to a place, race etc. So the extended title of this song, which didn't make it to the album, is 'When you stop seeing other human beings as human beings', explained Maestro. “Treelogy" was written while the trio was on tour in France. After the initial melody is presented it's a study of new harmonic devices that Maestro found, trying to create the contrast between a consonant, slow bass motion combined with a fast dissonant harmony on top of it. Ravitz and Roeder found a way of creating a long, intense build up, allowing the trio to explore the higher register of their instruments, which is something new to Maestro's music. This also displayed a new level of patience that the trio had found. “Painting" is a song Maestro wrote for the group's first album several years ago in his Brooklyn apartment. Maestro explains, “it was composed at 3 AM, while I was staring at a painting I had received as a gift from a friend in Bulgaria. It is a painting that resembles the work of Marc Chagall. The composition is an attempt to write music to what I feel the painting expressed instead of trying to express myself." It is included on Untold Stories mainly because of Ravitz's enthralling drum solo. “Ziv and I were talking a lot about how the drum solo got stuck in a concept in jazz music, usually stuck in the shape dictated by trading or soloing over the form unaccompanied. We spoke at length about how not many people are questioning this concept any more, and that drum solos can be treated as any other instrument, playing and reacting to harmony, melody and space. I felt it's a statement I wanted to make", said Maestro.

Other highlights on Untold Stories include “Elusive", a study in contrasts in registers and harmonic tension; “Endless Winter", inspired by NYC's painful winter, and, “an attempt to deal with harmony in a special manner, finding the harmonic twist only in the middle voices, while the melody and bass movements are completely consonant", explained Maestro; the completely improvised “Shades", which finds Maestro bravely opening the door to presenting an abstract piece that is not “beautiful" and part of his usual aesthetic; and the album's closer “Looking Back (Quiet Reflection)", which is all about time, space and simplicity. Maestro explained, “Together with this 'abstract world' that I'm discovering, I'm simultaneously being pulled more towards simplicity, which has to come with trust. Trust in the band members, and in the music. This is one of the compositions I'm most proud of on this album, as it opens new possibilities for me in how to approach music and composition in particular. It's a new direction that I'm very curious about."

Maestro is based in Brooklyn, and when not leading his Trio, the pianist can be found performing and recording with international artists such as Theo Bleckmann, Donny McCaslin, John Patitucci, Mark Guiliana, Avishai Cohen (trumpet), Anat Cohen, Jorge Rossy, Ari Hoenig, Myron Walden, Gilad Hekselman, Jonathan Blake, Clarence Penn and many others.