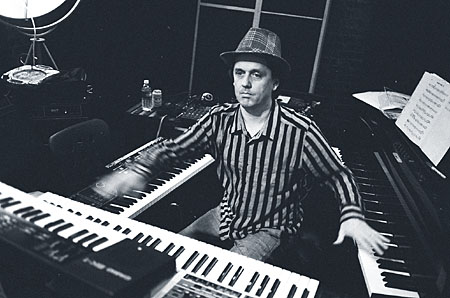 slideshow
Rhythmic Textures Woven and Stretched With Passion.
The Australian pianist Barney McAll has lived in New York for a dozen years, exploring a crossroads of jazz and funk and scoring music for film and television.

His profile as a bandleader, while still modest, has gradually gathered steam. At the Jazz Standard on Wednesday, he drew a crowd for both sets, making the evening a productive if imperfect showcase for his own contemporary designs.

Mr. McAll was celebrating the release of his sleek, self-assured fifth album, Flashbacks (Extra Celestial Arts), which prominently features the guitarist Kurt Rosenwinkel. But he led a different group than on the recording, with Ben Monder on guitar, Matt Clohesy on bass and Henry Cole on drums. His front line consisted of the tenor saxophonist Billy Harper and the trombonist Josh Roseman, with whom he often works as a sideman.

The altered personnel only Mr. Roseman appears on Flashbacks may have accounted for some ungainly touches in the first set. Mr. McAll has a taste for shifting tempos and elaborate digressions, and at times his band mates struggled to find their footing in his compositions. This was most apparent throughout a heavily plotted section of the title track and during a similar flourish in the set closer, Costello.

The groups stronger moments reflected more of an adherence to groove and especially to the folkloric Afro-Cuban rhythms that Mr. McAll has made a point of studying. End of Things Start of Things, from the new album, involved a ceremonial tempo, a flickering repetition in the rhythm section and finally a gate-crashing solo by Mr. Roseman. Abeokuta Suite, which appears on a previous album, had Mr. Harper improvising in a sharp, imploring vein against a busy polyrhythmic churn.