This newly released CD taps into Dena's passion for the sophisticated lyrics and music of the American Songbook and includes some unexpected treats in homage to her country and blues roots. 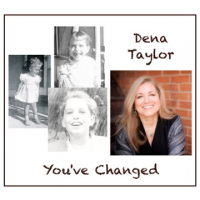 slideshow
Dena Taylor recorded her new album, You’ve Changed, while wondering if it would be her last time to sing and record. The day after it was finished she underwent throat surgery with no promises from doctors that she would even be able to talk after the surgery. Thankfully, it went well and she is speaking AND singing again!

On You’ve Changed, Dena leads listeners from her beginnings in country, to blues and ending where she most happily lives—tucked inside the American Songbook. The album features GRAMMY Award Winning musicians Redd Volkaert on guitar, Floyd Domino on keyboard and organ, and Ernie Durawa on drums, as well as Joey Colarusso on saxophone, Brad Taylor on acoustic bass, and Terry Hale on electric bass. Released in January 2016, airplay for the album has reached the United Kingdom, Amsterdam, Paris, New Zealand and Australia. It is getting good response from industry professionals as well, “With the opening notes of You’ve Changed, it's clear that what has changed is that Dena Taylor has confidently taken the reins of her music career and is making bold, risky decisions that are paying off.” –-Bree Noble, Women of Substance Radio

“The American Songbook tracks were carefully chosen to be a reflection not just of emotion, but to show off the sophistication of the beauty of words and music of that genre,” Dena says. “That’s what I love about the standards, even the silly songs, the use of language is so phenomenal. All the songs, regardless of genre, were also chosen for the emotional connection I have for each of them. This is the album I’ve always wanted to make and feel like I’ve been trying to make for years.”