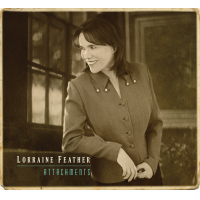 slideshow
"Attachments" (Jazzed Media - JM 1063, August 13 Release) is lyricist / singer Lorraine Feather’s 8th solo jazz album since the year 2000. On each of these ambitious releases, she has sung only her own lyrics, and received extraordinary press. Her 2010 stages-of-life release Ages and her 2012 Gothic adventure Tales of the Unusual received Grammy nominations.

This project is Feather’s most intense and intimate to date. The theme is the connections we have with family, friends, lovers, creatures and places.

“Attachments" is about the connections we have or form as we go along in life—to our families, friends, lovers, to animals, to places. A couple of the lyrics are almost entirely about a real event. Most are a combination of the past and present, my take on what other people might be thinking or feeling; books, films, and just imagination, all “bubbling up from the swamp.”

“A Little Like This” – Russell Ferrante came up with some beautiful music right off the bat when I brought the lyrics for “A Little Like This” to his house. He then did a second version that was just as lovely but in a minor key, and we decided that it was more in keeping with the mood of the song. At this point I didn’t have a title for the project, but described the concept to Russ. He closed his eyes for a couple of seconds, opened them, and said, “Attachments.”

“Attachments” – This was conceived as a “list song,” detailing the singer’s various romantic entanglements. I had many scraps of ideas written, and for the middle part, Eddie Arkin chose some lines that veered off the main subject to describe the person’s non-romantic emotional ties. Eddie wrote an evocative, impressionistic accompaniment for this section. We then went back to a verse, continuing the “list” theme. The song ends with two people having a drink together and one of them making a confession.

“I Thought You Did” – Last year, Dave Grusin called me to write some lyrics for a vocal album he was working on. In the course of this, one day I mentioned to Dave how I loved his “Memphis Stomp” theme from the all-solo-piano score of The Firm. Dave suggested I write lyrics to it. The original music has such an infectious feel, and I didn’t want to crowd it; I tried making the words somewhat sparse, offsetting the phrases in an asymmetrical way. I was excited to be able to work on this gem, and to have Dave himself on the track.