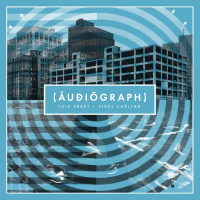 Audiograph was written to recreate the experience of browsing through a photo album. It is a call to see through our ears. Each song tells a story: the busy sounds of Harlem on a hot summer night, the quite contemplation of the Hudson River in winter, the fantasy and tension of a twirling ballerina, the chaotic roar of highway traffic. “There is a lovely lyricism to the writing” (concert pianist and CUNY faculty Alison Deane).

Colombian pianist Fidel Cuellar and Brazilian drummer Luiz Ebert have both built fruitful careers as sidemen in the local New York Brazilian, Afro-cuban, and modern jazz scenes, playing with the likes of Bobby Sanabria, John Benitez, and Vince Cherico. They are supported in this album by some of New York’s most promising up-and-coming musicians: Livio Almeida on saxophones, Will Caviness on trumpet, and Ian Stapp on bass. The album was recorded at Brooklyn’s Bunker Studio (Jason Lindner, John Medeski), mixed by Jeremy Loucas (Terri Lyne Carrington, Esperanza Spalding), and mastered by Katherine Miller (Cyrus Chestnut, Eric Reed).

Audiograph is now available for online purchase through CD Baby, iTunes, Amazon, and all major online retailers. Limited edition CD/Booklets are available, featuring the work of 6 photographers from around the world who shared what they saw while listening to Fidel and Luiz's music.