Both recordings are considered essentials from the jazz fusion era of the mid-'70s. 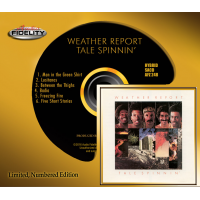 slideshow
Marshall Blonstein's Audio Fidelity will be releasing Weather Report, Tale Spinnin' and Return to Forever, Musicmagic on Hybrid SACD. Both recordings are considered essentials from the jazz fusion era of the mid-'70s.

Recorded in early 1975, Tale Spinnin', Weather Report's fifth studio album is filled with sunny textures of Latin and African flavors. The album stands with anything recorded during the period for the range of fresh, intriguing originals by the band's co-founders and principle composers, the keyboardist Joe Zawinul and the saxophonist Wayne Shorter.

Zawinul's pioneering interest in world music is in full evidence with the exotic percussion, wordless vocals, sandy sound effects and Middle Eastern and North African musical spices. His synthesizer sophistication is growing along with the available technology of the day. Wayne Shorter's work on soprano sax is more animated than on their previous albums and Alphonso Johnson puts his melodic bass more to the fore. 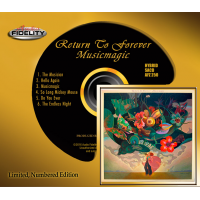 Musicmagic is Return to Forever's final studio album and one of the best jazz recordings released in the fusion genre. The album contains the final line-up of the band with only founders Chick Corea and Stanley Clarke returning from the earlier recordings. This 1977 release was the first Return to Forever album in five years to contain vocals, performed here by Gayle Moran and Stanley Clarke. This album also marked the return of original member Joe Farrell on saxophone and flute, along with several new members making up a killer five-piece horn section.

The sound is remarkably more orchestral than anything the group had previously done, a cross between fusion, jazz vocals, big band and grassroots acoustic jazz. Musicmagic celebrates the pure joy of music.

Both releases are mastered by Kevin Gray at Cohearent Audio and the SACD Authoring was done by Stephen Marsh at Marsh Mastering.

TRACKS:
1-The Musician
2-Hello Again
3-Musicmagic
4-So Long Mickey Mouse
5-Do You Ever
6-The Endless Night