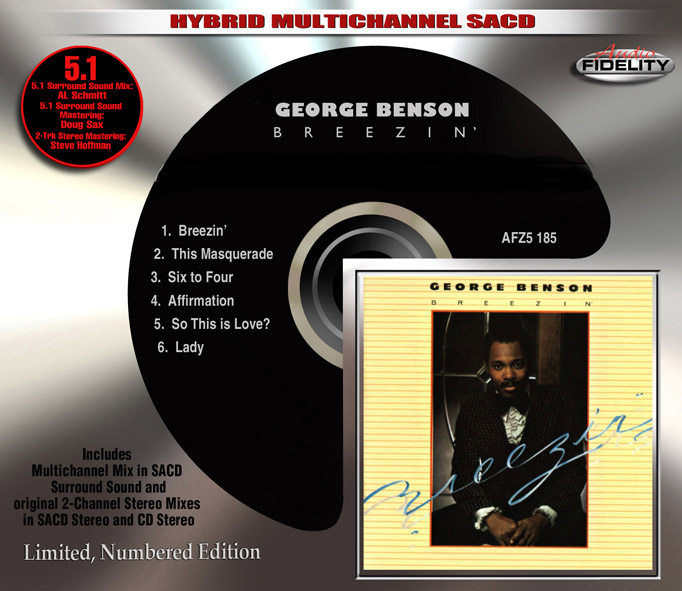 slideshow
Camarillo, CA - Jazz fans worldwide are buzzing with excitement over the release of Breezin' by legendary jazz singer and guitarist George Benson on Multichannel 5.1-Surround Sound Hybrid SACD from Marshall Blonstien's Audio Fidelity. George Benson's Breezin' is the best- selling jazz album of all time. It is a true virtuoso performance: a four-time Grammy nominee and two-time winner, the first album by a jazz artist to earn platinum certification.

Originally released in 1976, Breezin', spearheaded by the hit single “This Masquerade”, was the album that first alerted the public at large to Benson's talents. Long before that, however, he was known to jazz fans as “very probably the most gifted guitarist since Wes Montgomery.”

Leon Russell's “This Masquerade” (the first song in music history to occupy the #1 spot in jazz, pop and R&B charts), featuring Benson's soulful vocal and his trademark guitar-voice scatting technique, is the album's only non-instrumental. The other numbers include Bobby Womack's title song, the winner of Grammies for Record of the Year and Best Pop Instrumental.

“...among the half dozen best jazz albums ever made by a contemporary jazz musician.”

Tracks: This Masquerade; Six to Four; Affirmation; So This is Love?; Lady.