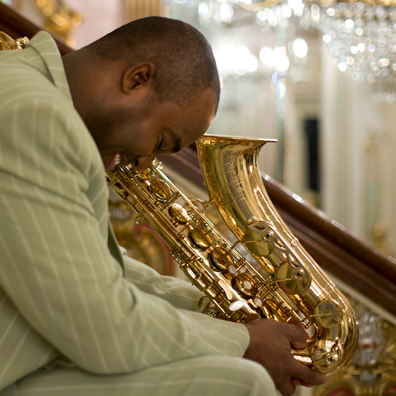 slideshow
One of jazz's most acclaimed, distinctive improvisers, virtuoso saxophonist James Carter returns to a favored format and simpatico colleagues with At the Crossroads, his 15th CD as a leader and the third showcasing his long-standing Organ Trio. Emarcy Records will release the CD on October 4.

Enjoying consistently inspired interplay with fellow Motor City stars organist Gerard Gibbs and drummer Leonard King Jr., Carter gets down in his inimitable way on a 12-track program that boasts rollicking swingers, moving ballads, a gospel standard, and, of course, plenty of blues-drenched items. A powerhouse companion disc to Live at Baker's, the 2001 recording that marked the trio's formation, and 2005's Out of Nowhere, their formal CD debut, the album places Carter right where he wants to be—grooving in the pocket with Gibbs and King.

“There's a reason the trio is my longest running and most cohesive band," says Carter, 42, who notes that all members contribute tunes and arrangements to the trio's book. “Gerard and Leonard are consummate musicians who have shaped the music at every level. We all have our own projects, so we go out into the world and deal with whatever musical merriment we have, and when we come back as this particular group, we bring our musical experiences back with us."

Carter packs At the Crossroads with a wide variety of gems. The opener “Oh Gee," a romping blues-with-a-bridge, displays Carter's tradition-rich tenor saxophone wares and reveals what potent partners Gibbs and King are. On the slower side are Ellington's timeless “Come Sunday," with a stirring vocal by King, and the ballad “My Whole Life Through," written by organ pioneer Sarah McLawler in the early 1950s. Carter's tender tenor shines here, as does Gibbs's locked-hands organ solo. “I was just struck by Sarah's music," Carter states. “She's a continued source of inspiration."

Other memorable selections include “Misterio," which investigates a comely Latin-ish beat, with Carter's warm soprano saxophone out front; and a searing version of Julius Hemphill's “The Hard Blues."

The trio's longevity is certainly a chief factor in the unmistakable success of At the Crossroads. Carter first met organist Gibbs in the late 1980s at Detroit jam sessions and was immediately impressed. “He continues to surprise and startle as far as the potential of what the organ can really do," Carter says.

King and Carter go back to his teenage years, when he was a member of King's combo Strata Nova, an important proving ground for young Detroit players. “He's been able to hip me to various artists, providing stacks of albums and cassettes over the years," Carter recalls.

Described by critics as “outrageously accomplished" and “simultaneously sensual and powerful," with “soulfulness and technique in perfect balance," James Carter has been a jazz marquee artist for more than two decades. He started playing high-level gigs with people like Lester Bowie, Wynton Marsalis, and Julius Hemphill in the late 1980s and established himself as a restlessly curious artist who finds “tremendous beauty in cross-pollinations of music and influences." Earlier this year, his collaboration with classical composer Roberto Sierra, Caribbean Rhapsody (Emarcy), was released to strong reviews. The CD contains Carter's tour de force performance of Sierra's Concerto for Saxophones and Orchestra, which he premiered with the Detroit Symphony in 2002.

Carter “often blends the far-out and the far-in within the same solo," Will Friedwald wrote in the New York Sun when the saxophonist's Present Tense (Emarcy) was released in 2008, “and lately he seems to be doing it at the same time, to have a traditional rhythm section playing against a screaming free jazz solo. He uses honks and screams not just the way the free jazzers do, but the way R&B-styled tenorists do, and thus somehow reconciles what is generally considered the least commercial variety of the music with the most accessible."