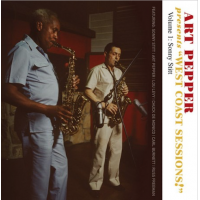 slideshow
In 1979, the Japanese owners of Atlas Records made Art Pepper an offer we should all be grateful he didn't refuse. They wanted him to record in his 1950s West Coast style backed by a range of equally gifted musicians. The money was good, but there was a problem. Pepper was signed to Fantasy. So Pepper or someone tied to the project figured out a nifty contractual loophole: he could do the sessions provided he was billed as a sideman, not the leader. Other choice musicians would be listed as leaders but when recording, Pepper would clearly be the headliner or share the role.

The sessions were recorded at Hollywood's Sage & Sound Studios, which is still thriving today. In the early 1980s, vinyl albums from the sessions were released individually, and in the digital age, Art Pepper: The Complete Atlas Years was released as a five-CD box in 1997. This set is long gone and all but impossible to find.

Enter Laurie Pepper, Art's wife, who has co-produced two magnificent reissues of the Atlas sessions with Cheryl Pawelski of Omnivore Recordings, one of the great revival labels today.

The first of the two is Art Pepper Presents West Coast Sessions! Vol. 1: Sonny Stitt. It originally was released by Atlas in 1980 as Groovin' High: Sonny Stitt & His West Coast Friends. On the new CD, we have the original six tracks plus two previously unissued tracks and an alternate take that had appeared on another Atlas album in the series.

On the Sonny Stitt date, the saxophonists play alto and tenor, and the results are lyrical, searing and, at times, competitive. Muscular bebop cool and hot. To top it off, Russ Freeman was on piano, adding his skeletal attack and gorgeous chord voicings. His solos here still thrill, and this marks the first and only time you hear Stitt with Freeman, a fascinating pairing. John Heard was on bass and Carl Burnette on drums.

On the Pete Jolly date, Jolly's piano frames Pepper with just the right amount of velvet and swing. Bob Magnusson was on bass and Roy McCurdy was on drums.

Kudos to Laurie (with Art above) for a brilliant and great-looking re-issue. Her liner notes for both sets are terrific. Kudos also to Cynthia for giving the package a polished and intelligent sensibility for fans. You won't be able to take these off once you put them on.

And here are tracks for the Pete Jolly session, courtesy of Laurie Pepper...