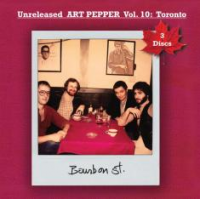 slideshow
At the end of July 1977, Art Pepper went into New York's Village Vanguard. Recordings of nine sets over three days would be released years later as a nine-CD boxed set called the Complete Village Vanguard Sessions. It was heralded as some of Pepper's finest late-career playing. But a month before his Vanguard run, Pepper was in Toronto at Bourbon Street with a different pickup trio—Bernie Senensky (p) Gene Perla or Dave Piltch and (b) Terry Clarke (d).

Long available only on bootlegs, the Toronto gig has just been issued as Unreleased Art Pepper Vol. 10: Toronto. The three-CD set with brilliant sound was produced by Laurie Pepper, the late saxophonist's wife, for her Widow's Taste Records. As Laurie writes about 1977, a magic year for Art Pepper, “the talent, nerve and luck that propelled [Art] were stronger than the self-destructive impulses that stymied him."

In essence, in Toronto, Pepper planted his feel in two decades at once—the frothy West Coast jazz of the 1950s that he helped create and the more wandering abstraction popular in the 1970s. But to be honest, this boxed set seems more like Pepper's visit back to the 1950s. Maybe this trip back in time came because Pepper wasn't high, as Laurie points out. Or perhaps he just felt nostalgic with the young trio behind him.

Songs such as Long Ago and Far Away, Here's That Rainy Day, What Is This Thing Called Love, All the Things You Are, The Summer Knows, I'll Remember April and Star Eyes all have a West Coast optimism, except for an avant-garde touch here and there. The balance of the set are trumpeter Joe Gordon's A Song for Richard, an original blues by Art Pepper called Blues for Heard, named for bassist John Heard; and Samba Mom-Mom, which Pepper named for Laurie ("Mom-Mom"), her “nom de honey-pie," as Laurie puts it in her notes. This last song sounds reminiscent of some of the Latin-flavored songs on Pepper's Mucho Calor in 1957. There's also a worthy 33-minute interview with Hal Hill, a Toronto jazz radio show host, a record store owner and promoter of Canadian jazz concerts.

To quote Laurie: “In a month, Art would conquer the world at the Vanguard. Then he'd go home, and from boredom (or from inertia—he'd been a such a fever pitch), he would nearly kill himself with drugs. He'd wind up in the hospital. He'd even go to jail. But after that, he'd tour the world with his own bands, record dozens of albums, write a hundred tunes, perform a hundred concerts, all of which were great, some of which were just magnificent."

How magnificent is debatable, depending on one's favorite Pepper period. What I do know is that in Toronto, Pepper sounded a lot like he did decades earlier—frisky and soulful, surfing the tops of songs with melodic freedom. All of this will be welcome news to Art Pepper fans who treasure his 1950s recordings.