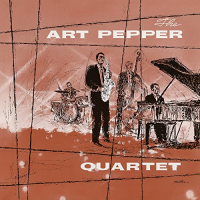 The second half of 1956 was a highly successful recording period for alto saxophonist Art Pepper. His streak began in July of that year when he appeared on Shorty Rogers' The Big Shorty Rogers Express (RCA). Prior to July, Pepper endured a tough emotional period. He served time in jail on drug charges from February to July 1955. But his freedom was short-lived. After violating the terms of his early release, Pepper was back in prison from July 1955 to June 1956, an extended duration that left him nearly despondent.

As Pepper noted in his autobiography, Straight Life, written with his wife Laurie Pepper, “When the time came to get out, I thought, 'Oh, man, I don't ever want to go back to prison again.' I got out and got a room in Hollywood, a little room on Yucca, right off Hollywood Blvd."

On the comeback trail in 1956, Pepper made a series of superb recordings. These included a live recording with Chet Baker at the Forum Theatre in Los Angeles (July), a studio date as a member of the Marty Paich Quartet (Aug.), a quintet album entitled The Return of Art Pepper with trumpeter Jack Sheldon (Aug.), the Johnny Mandel-arranged Hoagy Sings Carmichael (Sept.), a Chet Baker big band date (Oct.), a Russ Garcia-arranged orchestral session (Nov.), and Chet Baker's Picture of Heath album (Nov.).

Then came The Art Pepper Quartet album for Tampa Records, which has just been reissued by Omnivore Records as part of the label's ongoing collaboration between Omnivore's Cheryl Pawelski and Laurie Pepper. The album was recorded on Nov. 25, 1956 and featured Pepper (as), Russ Freeman (p), Ben Tucker (b) and Gary Frommer (d). The new release includes bonus tracks of Pepper Pot, Blues at Twilight and Val's Pal.

What makes this album special are the interactions between Pepper and pianist Freeman. Pepper played with a wide open swinging optimism while Freeman's keyboard had a rollicking tension, his chord voicings framing Pepper's wailing perfectly. In Pepper's playing, you can hear his desire to succeed, but there's also a mournful sense of regret in there, too. Diane and Blues at Twilight are perfect examples of this aching sound.

In Pepper's bright notes, you hear an artist desperately afraid of succumbing to addiction and the fear of winding up in prison again. Freeman understood this terror. “Everyone used heroin then, including me," he said in the documentary Jazz Seen: The Life and Times of William Claxton. “Fortunately, by the time Chet started [in 1952], I had stopped."

Freeman was among the finest of the West Coast jazz pianists in the early 1950s, especially behind Pepper and Baker. His chilled bop attack was always in sync with Pepper's and Baker's soaring melodic lines. Both musicians were at their '50s finest with Freeman on board. Pepper and Freeman first recorded together in 1949 in Charles Mingus's 22-piece bebop band and would continue to do so into the 1960s and again in the late 1970s and in 1980 on the Atlas Records session with Sonny Stitt. Both musicians were damaged goods and could go to unusual depths emotionally.