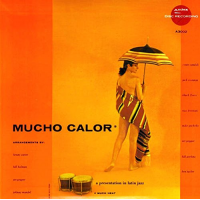 slideshow
When brothers John and Alex Siamas started Rex Productions in 1957, it was conceived as a holding company for several record labels that they launched the same year. Andex was Rex's jazz and gospel imprint but also released R&B and rock 'n' roll singles. Keen was primarily rock 'n' roll and R&B. The third was Ensign, which featured rock 'n' roll and gospel.

The reason for the category overlap among the labels was to avoid having one label played too frequently by radio stations, which would attract payola scrutiny. Different labels wouldn't stand out on playlists.

During Andex's two-year run, the label featured mostly West Coast jazz. The first album to be recorded for Andex was Mucho Calor, an octet album co-led by Art Pepper and trumpeter Conte Candoli. The album was an attempt to capitalize on the Latin-jazz craze exploding in New York and Los Angeles in the mid-1950s.

Recorded in October 1957, the album seems to have been the idea of Bill Holman, who arranged five of the 10 songs and probably contracted the date as well. The musicians on the session were Conte Candoli (tp), Art Pepper (as), Bill Perkins (ts), Russ Freeman (p), Ben Tucker (b), Chuck Flores (d) and Jack Costanzo and Mike Pachecco (perc). [Photo above of Conte Candoli]

What makes this album special are the arrangements. In addition to nifty scores by Holman, he let Pepper and Condoli arrange and also brought in Johnny Mandel and Benny Carter. [Photo above of Art Pepper]

Here are the songs and their arrangers: Surprisingly, Pepper's two arrangements are album standouts. Mandel's Pernod also has a smart snap and Holman's Old Devil Moon was hip. The rest were quite good, too. What I love most about this album is the airy feel. Though this wasn't the first time West Coast jazz musicians recorded Latin jazz (Shorty Rogers's Mambo Del Crow dates back to '53, and Stan Kenton recorded many Latin-jazz pieces, including Peanut Vendor, in the '40s), Mucho Calor has a relaxed Lighthouse All-Stars intensity. The solos are in the pocket, and you can feel the sand and the salty breeze. [Photo above of Johnny Mandel]