Sometimes, the way things and people come to me for Art's sake is--I want to use the word--miraculous. 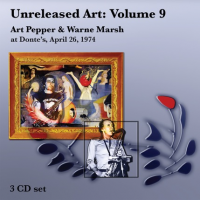 slideshow
On April 26, 1974, two wildly gifted and very different artists, Art Pepper and Warne Marsh, met again, for the first time in 17 years, by accident, on the stage at Donte’s in North Hollywood, because Jack Sheldon had to cancel. It must have made for an unforgettable night for those who found themselves sitting in the legendary club and listening to two cult heroes, two profoundly great musicians, playing for the audience and each other—out of the lives they’d lived at the same time, in the same places, but personally and stylistically so far apart.

Now we can join that audience. The music was recorded. And it will be released as a 3-CD set on November 11, just in time for the anniversary of Widow’s Taste, the label Laurie Pepper started ten years ago to bring her collection of Art Pepper’s unheard live performances to his fans.

In 1974, Art was at the very outset of what would be his last great comeback. He’d quit his job managing a bakery and was making a living playing bar mitzvahs and weddings. He had just started playing in Jack Sheldon’s band, once a month, at Donte’s.

Unlike Art’s, Warne’s career had been relentless and ongoing. He’d been touring with his own bands for years, and in 1974, he was traveling the world with Supersax, with whom he’d won a Grammy.

Though Warne forbade recording at his gigs, this gig was recorded. On reel-to-reel, quarter inch, quarter-track tape. The original tapes were quite good; the audio was probably picked up from the sound board. And the tapes were sent to Laurie Pepper by persons never known or now forgotten. She rediscovered them while cleaning out a closet. As she tells us in her liner note: “Sometimes, the way things and people come to me for Art’s sake is—I want to use the word—miraculous.” A good word for this night and those tapes. Laurie gave them to the incomparable Wayne Peet of Newzone Studio, who, “knows how jazz, how Art should sound.” He balanced and enriched the onstage sound, killed excessive noise, and dealt delicately with inevitable glitches that occur in live recording. Laurie, a non-musician, goes on to talk about the Pepper/Warne distinctions in the language of a dedicated fan.

“Art lives down in the grime of earth. You can find him on the L.A. Freeway. You can get into your car, roll up the windows, put on any of Art’s blues or ballads and delve into your pain and scream aloud to it."

“Warne seeks sublimity, improvising music that’s transcendent, that makes mere passions puny. He can take you to a level where shit doesn’t matter."

“Warne offers to distract us. He offers art, the endlessness and possibilities of art, the infinite inventiveness and charm. Something in me, if I’ll listen, hears his rhythmic and harmonic revelations and responds with pleasure, satisfaction, even laughter, as to a mystic’s holy trickery."

“Art discovers, witnesses, makes us confront, the disasters and the raptures swimming through our own, shared, volatile blood, beyond the reach of language. He knows our grief, our joy, our rage, and turns them into something timeless. His music seems to talk about real, actual life, the one that’s nasty, sweet, and short. And he convinces us, repeatedly, that, just as-is, it’s sacred.”

This latest album joins the catalog of previous albums from the “Unreleased Art Pepper" series. All have gotten rave reviews from well-known critics. They are:

And all (except Volume IV, which is available for download only) are available at both Amazon and CD Baby. Laurie says she’ll keep releasing yearly miracles as long as she keeps finding them. She says there are still plenty in her closets. Maybe, next year, a ballad set? Maybe.