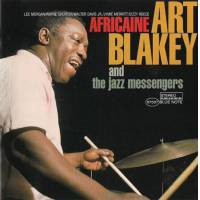 slideshow
Wayne Shorter's first studio album with Art Blakey and the Jazz Messengers was recorded on November 10, 1959. Two of the six songs on the date were originals by the tenor saxophonist. Then the album sat in the Blue Note vault for 22 years, when it finally was released as Africaine in 1981. We have re-issue producer Michael Cuscuna to thank for dusting off the find. Given that October 11 on Friday was the centenary of Art Blakey's birth, what better time to explore one of my favorite albums by the drummer and his hard-bop quintet.

The roots of the Messengers' name date back to 1947, with the formation of Art Blakey's Messengers. Originally, his recordings for Blue Note were released as 78s. Then in 1952, the songs plus others recorded in 1949 were released on a 10-inch LP entitled New Sounds. As the appointed leader, pianist Horace Silver revived the Messengers name in 1954 for recordings by the group with Blakey. In 1956, Art Blakey (d), Donald Byrd (tp), Hank Mobley (ts), Horace Silver (p) and Doug Watkins (b) appeared on a hard-bop album for Columbia called The Jazz Messengers. Blakey formed Art Blakey and the Jazz Messengers in 1958, with Lee Morgan (tp), Benny Golson (ts), Bobby Timmons (p), Jymie Merritt (b) and Art Blakey (d).

In the years ahead, a long list of musicians played in the group before moving on. Playing as a Jazz Messenger became a rite of passage, giving players a special seasoning. Performing and recordings in front of Blakey's persistent polyrhythms and press rolls had a burnished effect on these musicians.

Africaine's Jazz Messengers featured Art Blakey (d), Lee Morgan (tp), Wayne Shorter (ts), Walter Davis, Jr. (p), Jymie Merritt (b) and Dizzy Reece (conga) on Africaine and Haina. The album's track list features the title song and Lester Left Town by Shorter, Splendid by Davis, and Haina, The Midget and Celine by Lee Morgan. There isn't a wheel-spinner or tired songbook standard among them. [Photo above of Art Blakey and the Jazz Messengers in 1959]

What I love about this album are the exotic rhythms and the heat delivered by Morgan and Shorter. Davis's piano solos are exceptional, and Merritt's taut bass lines are extraordinary. As for Blakey, he's pure machinery here. The songs are aggressive with coy melodies and dashing harmonies by the horns. Shorter's debut with the band was clearly a success. A shame he had to wait 22 years to hear the results. [Photo above of Wayne Shorter by Francis Wolff (c) Mosaic Images]