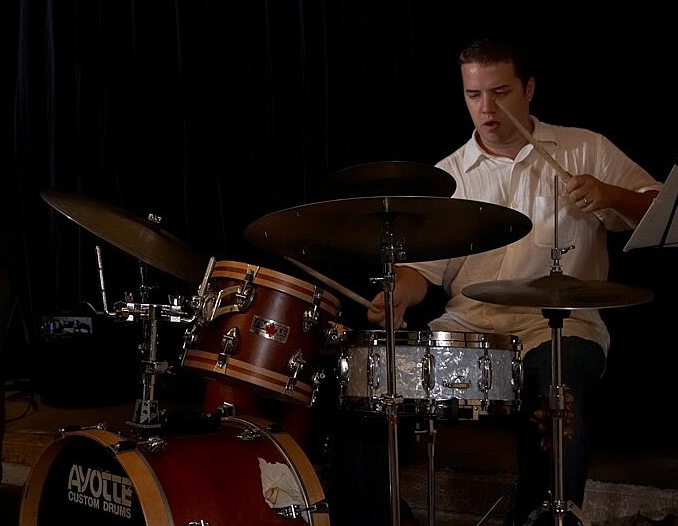 On There, his third recording as a leader, Cervini and the band revel in the joy that musicians experience playing for an enthusiastic crowd, and gives the listener a front row seat to enjoy this riveting set of music. Cervini commented that, performing for a live audience is one of the most rewarding aspects of being a musician. The energy that we get from the audience pushes us to even greater levels of creativity and spontaneity. This was definitely the case when I brought my quartet to perform for two nights at the Cellar Jazz Club in Vancouver. The sold-out audience was fantastic, and they propelled us to create some of our best performances to date. Luckily, we recorded both nights and this album features the best music culled from those shows.

The title, There, comes from the fact that the music was recorded over “there" in Vancouver, on the other side of Canada from Cervini's residence in Toronto, and also references and contrasts the drummer/composer's debut CD, Here. Two of the tunes featured on There, “Gramps" and “TGV,"are from that first recording. The album art features a drawing by Cervini's wife, Jenny, depicting an abstract view of the Cross-Canada tour's path.

Like most of the music on There, the album's opening tune draws its inspiration from places Cervini has visited (he clearly possesses a quality that all great drummers share; he's always listening), and people that have left indelible impressions on the artist. “Granada Bus" borrows its bass line from a little melody that plays at bus stops in Granada to let people know of the impending arrival of the bus, and, it happens to be in 9/8! “Gramps" is a heartfelt ballad written for Cervini's grandfather while he was sick several years ago (he is better now!), followed by “TGV," based on a jingle Cervini overheard in a famous Parisian train station. He explains, while on vacation in Europe, my wife and I took the TGV (Train à Grande Vitesse), which is the bullet train traveling between Paris and London. Whenever there was a track announcement over the P.A. system, they played a couple notes first to get people's attention and I thought it sounded very interesting (and quite mysterious).

Other highlights on There include “Tullamore," the name of an Ontario city Cervini has passed many times in his travels, but has never actually been to. “The Monks of Oka" is dedicated to the wonderful Thelonious Monk, and it's named after the monks of Oka, Quebec who make fantastic cheese. Pianist Adrean Farrugia and saxophonist Joel Frahm also brought in some compelling music, “Woebegone" (Farrugia) and Alert (Frahm), to the quartet during this tour. The drummer's good friend, trumpeter Nadje Noordhuis, arranged the album's one standard, “Secret Love."

I hope that this CD conveys the wonderful interaction we had with our audiences on those two nights, and gives you a feeling of the “live" music experience we all enjoyed! &#151Ernesto Cervini

Innovative and electrifying, Toronto jazz drummer Ernesto Cervini, who has shared the stage with many legendary musicians such as Joe Lovano, Clark Terry, Benny Golson, Cleo Laine, Pat LaBarbera, Dick Oatts, Buddy DeFranco, Eddie Daniels, Scott Robinson, Dave Binney, Jim McNeely, and many others, has energy to burn, whether radiating it from behind his drums or working on any number of musical and educational projects. Cervini's diversity as a musician (he is also an excellent pianist and clarinetist) has allowed him to travel throughout the world, performing in some of the world's greatest jazz venues such as, Birdland, Sweet Rhythm, The Jazz Standard, The 55 Bar, The Montreal Bistro, The Top Of the Senator, The Rex Jazz and Blues Club, and also many of the world's most prestigious concert halls, such as Massey Hall, The Glen Gould Theatre, The St. Lawrence Center for the Arts and the Sugita Theatre in Yokohama, Japan.

On the heels of his 2nd album, Little Black Bird, recorded with his quartet, DownBeat Magazine affirmed loudly with a four-star review that here is an artist to be taken seriously. His joyous and engaging third recording, There (Anzic Records), will be in-stores and online on September 27, 2011.