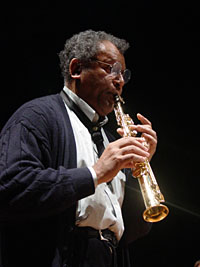 slideshow
New York, NY: At 2pm on March 1st, Anthony Braxton's Tri-Centric Foundation launched the new and improved version of the organization's website. Members of the press are invited to set-up press accounts to explore the site; because of the relaunch those that had accounts on the old website will need to set up new ones, contact TCF for details.

Active since March 2011, tricentricfoundation.org has been recognized as one of the most comprehensive websites for any living American composer. New Braxton House Records, the online record label of the Tri-Centric Foundation, has released 24 new album-length downloads in addition to offering a free career sampler of Braxton's music, free historic bootleg recordings, and its one physical product, the epic 4-CD box set Trillium E (the first studio recording of one of Braxton's operas). In its first year, the site has had roughly 30,000 visits from over 90 countries, with nearly 8,000 albums and bootlegs downloaded.

The new version of the website increases the user-friendliness and functionality of the operation. Visitors can still download free materials, purchase albums on an ala-carte basis, or choose to become TCF members for 7.99 a month; membership benefits include one free album-length download every month, discounts on all back catalog items, and other surprise bonuses.

In celebration of the new site, TCF is offering its second batch of free historic bootlegs, 13 rare concert recordings between 1975 and 1989 ranging from solo to orchestra. This month's New Braxton House release is the first volume documenting Braxton's 2007 four-night run at New York's Iridium; the follow-up engagement to the concerts that produced the critically acclaimed 10-disc box set 9 Compositions (Iridium) 2006. Upcoming releases include the first studio recordings of Braxton's Falling River and Echo Echo Mirror House Musics, the rediscovered tapes of the 1997 Lennie Tristano project (with Braxton on piano), and selections from the Tri-Centric Foundation's 4- day festival at Roulette in 2010. Within the next year, New Braxton House will also be delivering its second limited edition physical release, a DVD concert video of Braxton's 2010 duo performance with Taylor Ho Bynum in Amherst, MA.

The Tri-Centric Foundation is a not-for-profit organization that supports the ongoing work and legacy of Anthony Braxton, while also cultivating and inspiring the next generation of creative artists to pursue their own visions with the kind of idealism and integrity Braxton has demonstrated throughout his career. For more information, visit the Tri-Centric Foundation.