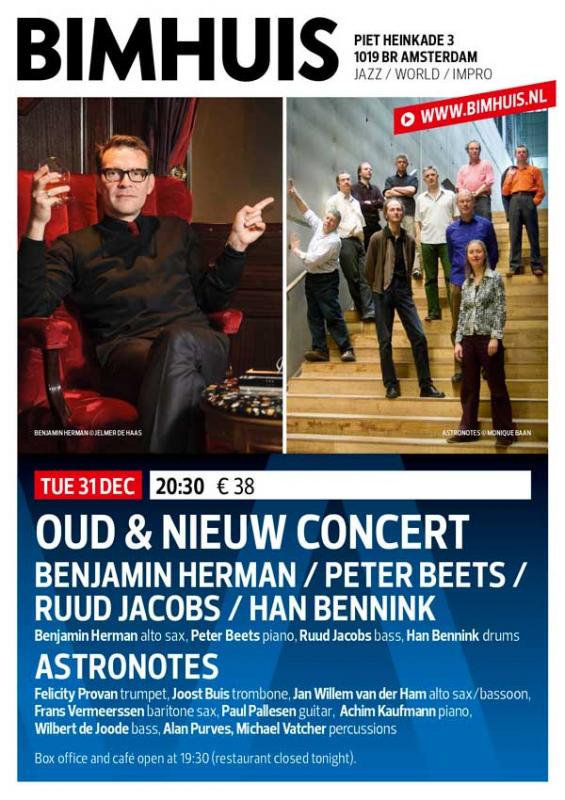 In Amsterdam, the party is often the city itself, and that holds especially true on New Year’s Eve. For jazz fans, the local institution Bimhuis is consistently the finest fiesta in town.

A mix of excellent entertainment, followed by early morning DJs, dancing and dining has established Bimhuis as one of Amsterdam’s premiere holiday destinations.

Closing the show, and completing another year in which Bimhuis hosted over 300 jazz events that included some of the genre’s most respected artists, will be the popular Astronotes and their precision based interpretation of Sun Ra’s Arkestra. Trombone master Joost Buis leads the ten man ensemble, promising to lead their audience to a galaxy of treasures.

Standing upon the walkway that leads from street level to the Musiekgebouw complex, visitors get one of the best outdoor views of Amsterdam’s spectacular fireworks display, which continues for hours before and after the midnight madness. Inside, a floor to ceiling transparent wall behind the performers makes for spectacular imagery as fireworks reflect off canal waters.

Beside the annual musical feast, January 1st marks the official kick off for Bimhuis’s 40th anniversary year, which promises to be filled with many of jazz’s sweetest evenings. Artists already scheduled for 2014 include the Hilario Duran Trio from Cuba, The Jeff Ballard Trio with Lionel Loueke and Miguel Zenon, and The Spring Quartet (Jack DeJohnette, Joe Lovano, Esperanza Spalding and Leo Genovese).

It all starts this New Year’s Eve, at Bimhuis.