Another Big Jazz Rally in Dusseldorf

SOURCE: PHILLIP WOOLEVER
May 18, 2015
Sign in to view read count 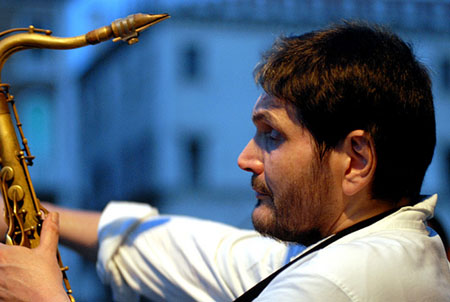 slideshow
The 23rd edition of the Dusseldorf Jazz Rally, scheduled for May 21-24, promises to be another wonderful weekend of jazz in a distinctly upbeat destination.

There are over seventy musical acts scheduled on a wide range of locations. Most shows are located throughout the central, old town area, which turns into a multi-block, carnival atmosphere in one of Europe's most dynamic cities.

Since becoming a regular venue, the beautiful Rhein Terrace hall has proved to be very popular. This year, a twin bill featuring the Steve Grossman Quartet and Salt opens the weekend’s festivities. Other top attractions booked for that stage include the Christian McBride Trio and Pee Wee Ellis with Danny Grissett in a tribute to Duke Ellington.

An act that shouldn't be missed comes with 70’s USA acid afro explorers The Pyramids, appearing with founding members Idris Ackamoor and Kamathi Asante in the Art Tunnel café, an always appropriately inspiring spot. Space funk for the newest millennium.

Each night also features a special concert by winners of the Sparda Jazz Award, on an outdoor stage amidst the historic beauty of Jan Wilhelm plaza. Marie Mokat, the Pascal Bartoszak Quartet and grand prize winners The White Panda will appear.

Other shows requiring the general admission badge are Soul Snatchers, Tilo Bunnies Trio, Swing Unit, Metromara, Offshore, and the The Talking Horns, among others.

The Jazz Rally free program is typically one of the region's most engaging, and includes Dizzy Birds, Venus Brass, Blue in Green, and the Magic Boogie Show and many others.

One of the festival’s most popular attractions in recent years, Enrico Crivellaro Meets TB4Q, is a free show outside the large, Uerige brewery where hundreds of fans dance next to the Rhine.

The wide array of outdoor sets is one of the Jazz rally’s strongest attractions as people can wander through “the world’s longest bar and hear literally dozens of musical acts, almost all of which are jazz-based. Over seventy performing acts are scheduled, and the Dusseldorf Jazz Rally always has plenty of good times for anyone's musical tastes.