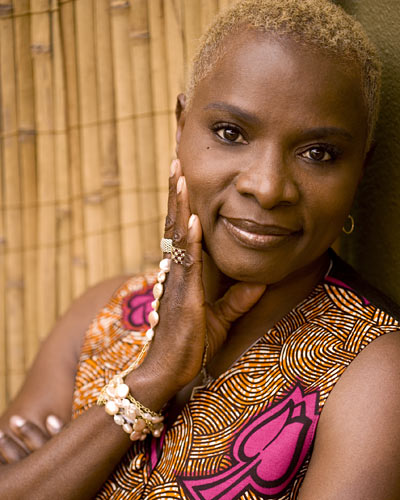 Angelique Kidjo has been deemed “Africa's premier diva" by Time Magazine. A Grammy Award winner, she has been one of the most successful artists to emerge on the world music stage in the 1990s and 2000s. Her music not only draws from African traditions, but also interprets the ways those traditions developed after Africans were seized and taken to the New World. The elements of American soul, funk, rap, jazz, Brazilian samba, Jamaican reggae, Cuban and Puerto Rican salsa all show up on her recordings, along with various African styles. On her new album, OYO, released by Razor and Tie, Kidjo revisits the music that was instrumental in her artistic formation in Benin, the country whose communist dictatorship she fled in the early '80s. She currently resides in New York City, where she is an exceptionally active member of the music scene, and she reaches people around the world with her recordings, tours and philanthropic work.

Constantly recording and touring, Kidjo is equally engaged in advocacy and activism, from UNICEF (for whom she is a Goodwill Ambassador) to her own Batonga Foundation, which provides educational aid to young African girls. In September 2009, she joined forces with UNICEF in a campaign to eliminate tetanus. A portion of the proceeds, for downloads of the song, “You Can Count On Me," provides tetanus vaccines to pregnant women and mothers. Another haunting song, “Agbalagba," was originally penned for and offered as a free download with the New York Times best-selling book Say You're One Of Them by African writer Uwem Akpan. The book, which was recently featured in Oprah Winfrey's book club, consists of five stories, each written from the point of view of a child in Africa.

ANGELIQUE KIDJO is part of The Town Hall 2010 season that includes Lizz Wright and Richard Bona (April 9th); Brian Stokes Mitchell (April 17th) and the hit series Broadway By The Year (Musicals of 1966 on May 10th, and Musicals of 1990-2010 on June 14th). The complete 2010 season is available as a subscription series, or individually, with subscriptions available now directly from The Town Hall.

Built in 1921 by a group of suffragettes, The Town Hall began as a lecture hall and public forum for debates. Over the decades, the stage has been graced by Eleanor Roosevelt, Margaret Sanger, Billie Holiday, Igor Stravinsky, Bob Dylan and Miles Davis. Today the hall flourishes as a popular, affordable venue, boasting the hottest acts in rock, pop, folk, cabaret, world music, comedy and dance, including Billy Joel, Blondie, Elvis Costello, Natalie Merchant, Graham Nash, Liza Minnelli, Cyndi Lauper, Norah Jones, Andre Watts, Henry Rollins, Joe Jackson, Pink Martini, Regina Spector, Brian Adams, Aimee Mann and Dawn Upshaw. For over a decade, The Town Hall has hosted live broadcasts of Garrison Keillor's Prairie Home Companion. Over the past two-and-a-half decades, The Town Hall has produced a number of new and critically acclaimed musical series, which include The Century of Change, Not Just Jazz, Broadway By The Year and The Broadway Cabaret Festival.