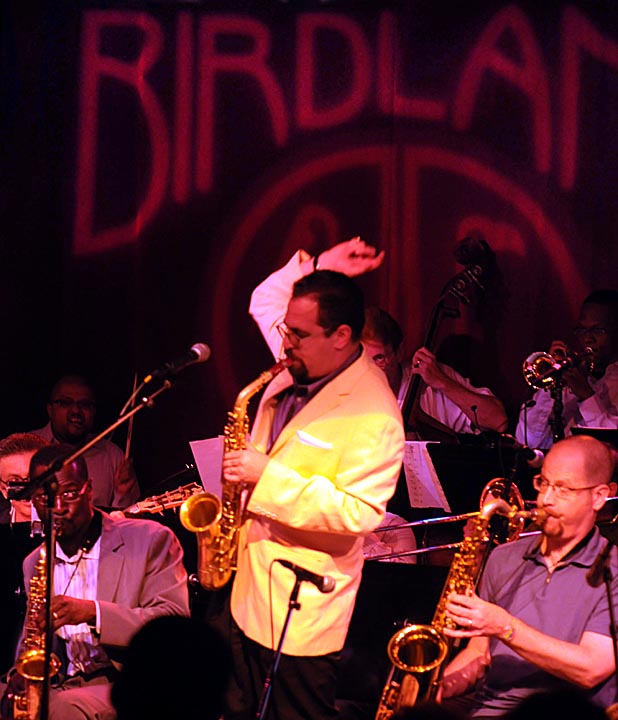 slideshow
Having a large jazz orchestra in this century has often posed challenges besides the economic ones.

Many “big bands" get formed only for special occasions and are thus not well-rehearsed. Then there's the matter of repertoire: should a band made up of improvising jazz players go into the past or boldly plunge into the future, however one defines it? Or should such an orchestra bridge Past and Present—not an easy thing: it means more than letting the saxophone soloist play GIANT STEPS licks in the middle of A STRING OF PEARLS.

Saxophonist Andy Farber has found his own answer to these questions. He's worked with all kinds and sizes of ensembles comfortably. But his own orchestra has found its own path that pays homage to the past without being anyone's ghost band—in a way that's both reassuring and innovative.

Here's what Andy told Alvester Garnett, who not only plays wonderful big band drums but also wrote fine liner notes (!): “The goal of this record is to focus on the emotional and spiritual element of large group ensemble playing. I feel like there is a great amount of nuance in this band, ao conscious effort in playing pretty, shaping lines, playing parts as if it were a solo." Does that give you a sense of the silken textures Andy and his Orchestra have created?

You don't have to take it on faith. The band sounds wonderful&#151and its overall sound is not heavy or ponderous, nor does it make you wonder what all the players in the band are doing (some “big bands" quickly break down into soloist-plus-rhythm that you wonder if the other players have gotten off the bandstand to check their email—not here).

And the names of the players will tell you a great deal. Andy himself is a fine solo player (as I hope you've seen in my videos of him sitting in at The Ear Inn): here he's joined by Dan Block, Chuck Wilson, Jay Brandford, Marc Phaneuf, Kurt Bacher, saxophones (with a special guest appearance by Jerry Dodgion); Brian Pareschi, Irv Grossman, Kenny Bampton, and Alex Norris are the trumpets; Art Baron, Harvey Tibbs, Wayne Goodman, Max Seigel the trombones; Bob Grillo plays guitar; Mark Sherman, vibraphone; Kenny Ascher, piano; Jennifer Vincent, bass; Alvester Garnett, drums. And there is some hip vocalizing from the Prince of Hip, Jon Hendricks and his Singers.