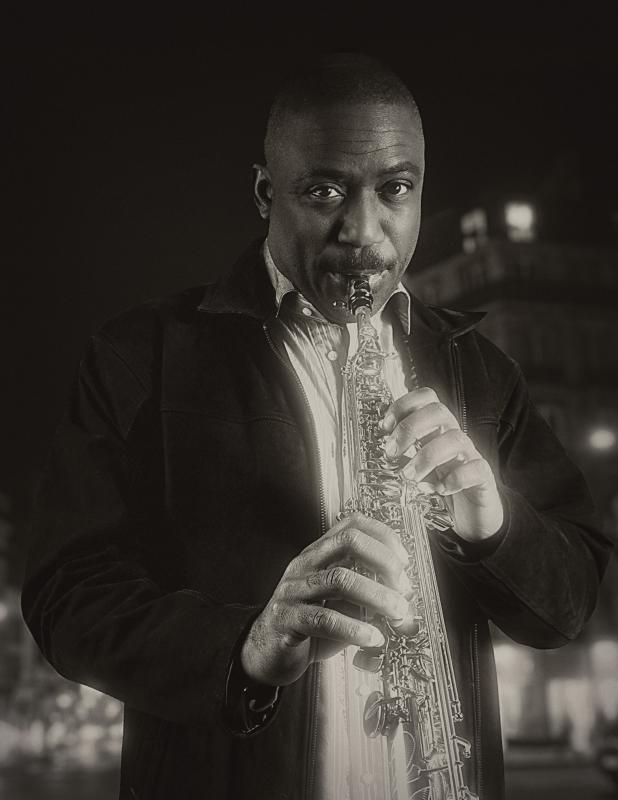 slideshow
Last December, as saxophonist-educator Paul Carr and his wife Karmen Carr were busily locking down the forthcoming 3rd annual edition of their late winter Mid-Atlantic Jazz Festival, Paul invited this writer to a recording session for his summer 2012 release Standard Domain. Having worked with Paul and Karmen to develop the Mid-Atlantic Jazz Festival, which arose from the ashes of the late East Coast Jazz Festival, I was also eager to catch at least part of the recording session because this would be the same band Paul would lead at MAJF in February, featuring Lewis Nash on drums, Michael Bowie on bass, Terell Stafford on trumpet & flugelhorn, and pianist Joey Calderazzo… and also because friend and colleague Bret Primack – the erstwhile Jazz Video Guy – was in town to shoot the proceedings for his essential YouTube channel. Check Bret’s recording session video below, then read about the anatomy of Standard Domain. —Willard Jenkins

Arriving by the back door adjacent to drummer Lewis Nash’s isolation booth, Lewis is practicing; Bret Primack/The Jazz Video Guy is busily setting up his cameras in each room for his YouTube shoots; pianist Joey Calderazzo and trumpeter Terell Stafford casually shoot the breeze on the studio couch as the leader, saxophonist Paul Carr readies for the next take, which will be the title track, his original “Standard Domain”.

Terell Stafford: “This is my third Paul Carr record session. Paul Carr taught me everything I know. Just look at these musicians; he gets the greatest bands, the music is great… He was the very first jazz gig I had, when I was in grad school (Rutgers) getting my Masters in classical tpt I decided I wanted to play jazz. I called Paul Carr and said “I haven’t played jazz before, but can I come play at the jam session?” He said “sure,” and that’s where I started learning tunes, he taught me tunes, taught me about harmony, gave me lessons in the morning before I had to go back to grad school and finish my Masters… so he did everything. I was finishing my classical trumpet degree and Paul was gracious enough to have me come to Takoma Station every week; this was around 1989-90. He gave me my first opportunity. And from being at the jam session with Paul is where I met Bobby Watson.” Terell went on to become a core member of Watson’s vibrant Horizon band.

Michael Bowie: “This is [my] fourth [Paul Carr] session.” [What keeps you coming back?] [laughs] “By the grace of God, and Paul.” [What is it about Paul?] “I just love Paul’s music, and I love the varied-ness of the records; he throws me into different pools and I’ve gotta sink or swim and I love it! Paul has taught me a backstroke or two.”

Paul Carr: “I wanted to do some tunes that people have heard before, and then some tunes that maybe I felt needed more exposure; they’re standards or standards that jazz fans like, so that was the thing with the tunes that I picked.” [What about Standard Domain, your title piece?] “That tune is a combination of a lot of… the harmony on that tune is a combination of a lot of different standards that we play all the time; that set of changes, you could see that was the first time the guys ever played it, but the changes are so standard – you hear them all the time – so that’s what its like in the domain of standards; these are some options, and I put a little kind of Latin-free feel in it. All that is encompassed in the world of standards.”

[What about some of the other tunes that’ll be on the album, like “Dream Dancing,” “Warm Valley,” “Tetragon”…?] “That’s the same thing; “Dream Dancing” is a beautiful tune that is not played or sung enough in my opinion; it’s a beautiful Cole Porter tune. “Warm Valley” is another tune… there’s the Ellington-Mingus recording and a few other sources; I love that tune, it’s a beautiful melody, so I wanted to record that.” [“Tetragon” seems like a natural because I do hear some Joe Henderson in your tenor playing from time to time.] “I love Joe Henderson [PC has the tribute album Musically Yours: Remembering Joe Henderson in his discography], “I love that tune, and its another one that hasn’t been played a lot.”

Joey Calderazzo: [What compelled you to come up from your home in North Carolina and do this session?] “That big paycheck at the end of the day [laughs]. Branford [Marsalis, in whose quartet Calderazzo has performed for many years] and Paul are friends and I met Paul through Branford, we played some golf together and I dig him. And when I found out Lewis Nash was on the date – I’d never played with Lewis before, so count me in. I’ve wanted to play with Lewis, and Terell’s been my boy for 20-something years, I played with him in Bobby Watson’s [Horizon] band. I don’t get out much either, I don’t do many record dates anymore. I just choose not to do ‘em. I’ve been really busy, maybe it’s where I am – out of that New York loop.”

Lewis Nash: “This is the third session I’ve done with PC.” [What compelled you to come back?] “My previous experiences with Paul have been enjoyable and musical, so I didn’t see any reason NOT to come back again!” [How long have you been acquainted with Paul?] “Terell introduced us in ’07.”

PC: “The Joe Henderson session was when I first met [Lewis].”

Lewis: “That’s a testament to the fact that they’re all just a blast, all [sessions] with musicians that I hook up with in a way that’s fulfilling.” [This is the first time you and Joey have worked together.] “We’ve known each other through the years, we’ve ALMOST been on stuff, but this is the first time it actually happened.” [You just got off the plane from Japan. What were you there for?] “I did a couple of things: I co-led a big band called the USA/Japan All-Star Big Band with Terumasa Hino, the Japanese trumpet player; and we had 9 musicians from the States, 9 musicians from Japan; we did a 6-concert tour. Following that was a trio tour with Ron Carter and a Japanese guitarist named Takeishi Yamaguchi. I’m still a little jet lagged, but glad to be back here before the holidays.”

Engineer Jeff Gruber: [With a session like this, when you’ve got a quintet with two horns, what are your challenges?] “When the horn players want to be in separate rooms it makes it a little bit more challenging for them because they can’t see each other physically; so you want to make sure their mix is good enough so that they can HEAR each other and catch the nuances of each other’s playing. It’s kinda like the next best thing to being there, but jazz musicians really, really love the physical interaction of being close together. But for the best possible sound and to be able to fix mistakes, we have to have some kind of separation. So if somebody wants to do something over again… if Terell is in the room with Paul and one makes a mistake, you have to do the whole thing over again. There are also tuning issues, if somebody doesn’t feel like their intonation is that good at that particular moment, if they feel like they’re out of tune, then the other guy is stuck with that guy’s chocolate on their peanut butter. But when they’re separated they can always do their parts over as much as they want to, and perfect it. The separation is better for the player who wants second chances, and that’s a big deal for a record that you’re going to hear over and over again.”