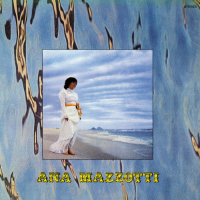 Brazil in the 1974 was a country of joy and pain. The military had taken control in a coup 10 years earlier and would rule with harsh anti-communist rule until 1985. Strangely, the dictatorship reached the height of its popularity in the 1970s with sizable economic growth known as the “Brazilian Miracle." But prosperity came with a price. The regime limited freedom of speech, curbed the media and exiled or tortured dissidents.

During these years of social constraints and torment, gorgeous music managed to surface and be recorded. Among the many vocalists and musicians who were making records during this decade was Ana Mazzotti. Born in 1950 in Caxias in southern Brazil, Mazzotti played accordion at age 5 and soon followed with the piano. In 1971, at 21, she conducted her local choir, the Coral Bento Goncalves.

With the advent of rock in Brazil in the 1960s, Mazzotti had led guitar groups and an all-female Beatles cover band. She also fronted Desenvolvemento, an eight-piece psychedelic group. Before moving to Sao Paulo to launch her career in the early '70s, Mazzotti met drummer and producer Romido Santos, whom she would marry.

In 1974, Mazzotti recorded her first album, Niguem Vai Me Segura, on a shoestring budget. She sang vocals and played keyboards. As it turned out, the album was more of a demo than a finished product. Dissatisfied with her first album, Mazzotti returned to the studio in 1977 and re-recorded many of the songs with greater self-assuredness and more elaborate arrangements. Her band included horns and Azymuth, the jazz-funk Brazilian trio. The second album was called Ana Mazzotti.

Neither album achieved commercial success. Which is odd, since her first album covered Roberta Flack's 1974 hit Feel Like Making Love with a terrific soft samba and English lyrics.

In the early 1980s, Mazzotti performed at music festivals in Brazil, including the Guarujá Summer Festival in 1982. But she was racing against time. She was battling cancer. Then Mazzotti died in 1987 at age 37, living just long enough to see the return of a civilian Brazilian government in 1986.

Now both of her albums have been released by Far Out Recordings, a London based independent record label specializing in Brazilian music. Both albums have been remastered and are available in three formats—CD, digital download and 180-gram vinyl. The music is surfy, intelligently arranged and sung with elan, strength and sensuality by Mazzotti. Hats off to Far Out Recordings for restoring two Brazilian gems that would likely have been forgotten without the label's efforts.

And here she is on Brazilian TV in the 1980s. Dig her chords on electric piano, not to mention the funky bass and superb drummer in this Brazilian funk band...