Amir ElSaffar's Two Rivers at Firehouse 12 This Friday May 30

SOURCE: IMPROVISED COMMUNICATIONS
May 27, 2008
Sign in to view read count 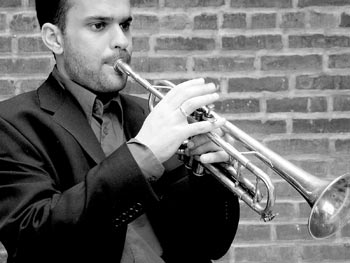 slideshow
On Friday, May 30th, New Haven's Firehouse 12 will present the penultimate event of its 2008 Spring Jazz Series, a two-set performance by Iraqi-American trumpeter/composer Amir ElSaffar and his working group, Two Rivers. This group takes its name from ElSaffar's groundbreaking cross-cultural suite, which was commissioned by Philadelphia's Painted Bride Arts Center and documented on the acclaimed 2007 recording, Two Rivers (Pi Recordings). The music is a result of ElSaffar's immersion in the music of his ancestry, the Iraqi Maqam, and the blending of those traditions with his background as an accomplished jazz and classical trumpet player. His ensemble will feature Rudresh Mahanthappa (alto saxophone), Zafer Tawil (violin, oud and percussion), Carlo DeRosa (bass) and Eric McPherson (drums).

Critics called Two Rivers “gorgeous" (Troy Collins, AllAboutJazz.com), “daring" (Jason Gardner, Global Rhythm), “hypnotic and arresting" (Karl Stark, Philadelphia Inquirer), “ambitious and deftly executed" (Siddhartha Mitter, Boston Globe) and “deeply affecting, musically adventurous and provocative" (Laurel Gross, AllAboutJazz-New York). The Chicago Reader's Peter Margasak added, “it's a staggering accomplishment that subtly erases the lines between his two chosen disciplines. Some of the album's pieces are straight-up maqam, moving with rigorous grace and precision, while others masterfully meld it with postbop fundamentals. While plenty of horn players have tapped into Middle Eastern modalities since John Coltrane became fascinated with Eastern sounds in the late 60s, it's rare to hear it done with such conviction and authority."

ElSaffar was born outside Chicago in 1977, and soon became influenced by the spectrum of music the city is famous for, most notably blues, jazz and classical. He would go on to become a classically trained trumpet player, performing and recording during his young career with such esteemed conductors as Daniel Barenboim, Pierre Boulez and Mstislav Rostropovich. His focus changed to jazz a few years later when he won both the Carmine Caruso Jazz Trumpet Competition and the International Trumpet Guild Jazz Improvisation Competition in 2001. He used the prize money to travel to Iraq, hoping to reconnect with the music his Iraqi-born father played him as a child and expand his improvisational palette, but what began as a two-week trip quickly became a quest to study maqam and its traditional instruments directly with masters living all over the world. His Two Rivers ensemble is dedicated to bringing new life to these traditions and sustaining their legacy for future generations.