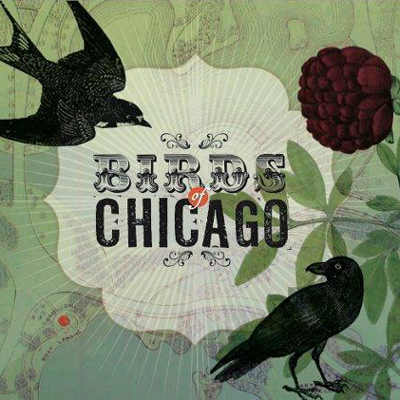 Chicago, IL: Birds of Chicago, a collective based around singer-songwriters/ instrumentalists JT Nero and Allison Russell, are set to release their eponymous debut album on October 2, 2012.

Comprising twelve original songs, Birds of Chicago immediately soars into flight with the protracted leap of its lead track, “Trampoline,” an infectious bass- driven bastion of communal joy being shared for free at BirdsOfChicagoTrampoline.

From there, the journey fluidly glides throughout the canon of American music, from the gospel-infused harmonies levitating “Cannonball,” to the simmering soul of “Before She Goes,” to the Cajun-spiced polka of “Sans Souci,” to the sparse, yet sprawling, “rock & roll is dead and in its grave” soliloquy encircling “Old Calcutta” to the rustic waltz of “Galaxy Ballroom” through to the deep burning sojourn of “The Moonglow The Tapeworm”.

Its destination of migration has been an organic one.

On 2011’s Mountains/Forests, released under the JT Nero banner, the two singers struck a definitive chord, tapping into the true, bewitching power of their voices together on an entire record. Featuring a full cast of characters that would round out the “Birds of Chicago” ensemble — the Clouds and Michelle McGrath, a luminous singer and picker from the hidden hills of Southeast Ohio, the collective amassed a cavalcade of praise on both sides of the Atlantic.

At the beginning of 2012, JT and Allison took to Kickstarter to raise funds, which poured in, allowing them to set up shop in Chicago’s Humboldt Park with engineer Zach Goheen, whom previously produced records by Russell and Nero’s respective bands, Po' Girl (Vancouver, BC) and JT and the Clouds (Chicago, IL).

ETown co-hosts Nick and Helen Forster have dubbed them “the dynamic duo” as Nero’s fractured country-soul wraps Russell’s silver and gold tones with a warm embrace. Imagine a youthful Van Morrison taking a delightful vocal stroll with Emmylou Harris or the intermingled majesty of Richard & Linda Thompson on their 1974 debut or Peter Yarrow and Mary Travers taking turns blowing in the wind and the proper frame of mind arrives in due time.

A frame of mind invigorated by a sublime intertwine of subtle scents of pine.

Not too perfect, not at all saccharine, echoes of mountain gospel, street corner doo-wop, classic soul seamlessly dangle from the vine. Accompanied by just a banjo and a guitar, it’s chilling. Fired by a full band, it’s a full tilt revival appealing to Jamband land as well as fans of Raising Sand (by Robert Plant and Allison Krauss), Mumford & Sons, Fleet Foxes and Grateful Dead.

The Birds’ “Sugar Dumplin’” glistens with the glaze of “Sugar Magnolia,” announcing its grace as a fresh-faced American beauty!

Much like Jerry Garcia and Bob Weir’s Uptown Jug Champions, Nero and Russell are most at home on the road - pick almost any night in the next thousand days and you can bet they will be at some theater, pub, winery, VFW hall, roller rink (they wish), living room or historical landmark under a moonlit sky dovetailing their voices, singing their songs of hope, despair, love...and electric seahorses. And honey bee apocalypses. And coconut ice cream. It's familiar and strange - the everyday and the magical.

Whether touring as a duo or with the full family band, Nero and Russell have emerged as “two of the most compelling new voices in American Roots music” as noted by the Chicago Sun-Times. The duo is gearing up for a run of dates from August 21 to November 8, with eight weeks of shows with acclaimed “dirt-road” folkster Sean Hayes. Select festival dates include Pickamania, Strawberry Music Fest, The American River Music Fest, The Roots Music Fest at Joshua Tree as well as several shows with Matt The Electrician and a hometown album celebration on November 10 at the Old Town School of Folk Music.