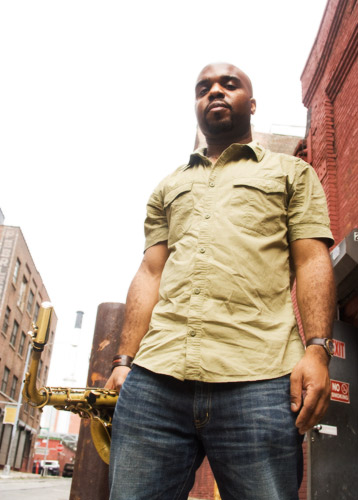 With the March 18, 2008 release of Optimism (Changu Records CR001), Jaleel Shaw's second CD as a leader, the award-winning alto saxophonist and composer further solidifies his position as one of the most distinctive writer/arrangers and imposing instrumentalists on today's international jazz scene.

Shaw's nine originals and arrangements of two standards on Optimism, which he produced himself and is the first release on his new label Changu Records, continue to explore the ruggedly individualistic sonic landscapes the saxophonist first featured on his recording debut as a leader - 2005's Perspective (FS New Talent 222) which was named one of that year's top CDs by All About Jazz and Jazzwise. Writing in The New York Times, Nate Chinen praised that album as “...a showcase for Mr. Shaw's stout, self-assured alto saxophone playing and his smartly conceived original compositions." Chinen added that Shaw's ..."sound [is] brawny and full-bodied, but capable of quicksilver actions - and his improvisational method is surefooted and exploratory." Shaw, then 27, won his first ASCAP Young Jazz Composers Award for “Heavyweight Champion" on Perspective.

The words “young lion" and “talent deserving wider recognition" are frequently bandied about when talking about emerging artists, but they certainly apply to Shaw. In 2007 he received enough votes to appear for the first time on the top-10 list of alto saxophone “Rising Stars" in the DownBeat International Jazz Critics Poll. Shaw's debut there is the result of a rising international profile and expanding solo career due to, among other creative associations, his having toured globally since 2005 as a member of Roy Haynes' quartet (and appearing on the legendary drummer's Grammy nominated CD Whereas) and having been a member of the Mingus Big Band since 2000, appearing on their Grammy nominated CDs “Tonight At Noon" and “I Am Three." Tours in 2007 with vibraphonist Stefon Harris and pianist Jason Moran added to the forward and upward momentum Shaw is currently experiencing as a player among players.

Optimism should raise Shaw's profile as a player and writer with the public as well. He is reunited on the CD with the pianist Robert Glasper, the Norwegian guitarist Lage Lund (who attended the Berklee College of Music with Shaw) and drummer Johnathan Blake (a childhood friend who, like Shaw, was born and raised in Philadelphia) who all appeared on Shaw's first CD. Along with the saxophonist, they have been cited by The New York Times as “...stewards of a next-generation jazz mainstream that's inspired, not constrained by timeworn traditions...[who provide] evidence of jazz's vigorous health - and the up side of independence." Bassist Joe Martin rounds out the core personnel on Optimism and Jeremy Pelt plays trumpet and flugelhorn on one track each.

Playlist - The Sounds of Senegal, Atlanta and Two Alto Saxophones

A bright, robust energy suffuses the playing of Jaleel Shaw, an alto saxophonist who works with the venerable drummer Roy Haynes. Mr. Shaw has a purposeful but uncomplicated relationship with the postbop tradition -- he isn't out to reinvent the wheel, just spin it as he pleases -- and he keeps excellent company, leaning on a handful of like-minded peers. His second album, “Optimism," just out on his own Changu label, is an especially effective showcase for the pianist Robert Glasper and the guitarist Lage Lund, who imbue several of its tracks with a warm, contemporary glow.m(The blend of Fender Rhodes piano and electronically looped guitars has become a familiar sound in jazz, thanks to players like these.) With only two exceptions, all the compositions are Mr. Shaw's, and they reflect his assertive but generous personality as a bandleader.

Where jazz is going, folks like alto saxophonist Jaleel Shaw will be steering the way. - The Philadelphia Inquirer

Mr. Shaw has a strong voice and an acute temperament. - The NY Times

Jaleel Shaw's fruitful imagination, meticulous technique, and an elegant playing ability has extracted the young altoist straight from the middle of the infuriated jazz scene...Shaw's lyricism without any hesitation is undeniable. - JazzReview.com

One of the high points of the live recording sessions by the Roy Haynes Quartet in early 2006 (Whereas) was the appearance of young alto saxophonist Jaleel Shaw. - The Jazz Police

....has a maturity and assuredness in his playing and even more so in his composing that's well beyond his years....also shows a fine touch as a ballad player. - All About Jazz