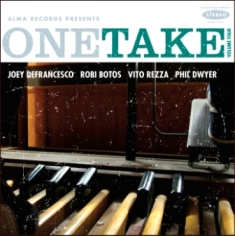 The critically acclaimed Joey DeFrancesco returns to the Alma fold for One Take: Volume 4 , the latest in the label's series of CD/DVD releases that captures the spontaneous energy and vibrant intensity that ignites when four world-class musicians come together in the studio, with no preconceived agenda. Joining the organist are pianist Robi Botos, saxophonist Phil Dwyer, and drummer Vito Rezza. All four had appeared on earlier albums in the One Take Series,with DeFrancesco and Rezza teaming with trumpeter Guido Basso and guitarist Lorne Lofsky for the very first One Take, back in 2003. Dwyer and Botos had shone on 2005's One Take: Volume 2, alongside ace drummer Terri Lynne Carrington and bassist Marc Rogers.

The One Take series of releases captures the very essence of the spirit of jazz in its improvised approach. “Something spontaneous like that is why we love to play jazz. It's all about having fun and creating something nice," says DeFrancesco. The series' tag line says it all: “No rehearsals, no overdubs, no edits—just raw, untouched and inspired performances, and in One Take."

DeFrancesco needs little introduction. At 17, he signed with Columbia Records and toured in Miles Davis' band. He has since recorded and toured with the likes of John McLaughlin, George Benson, John Scofield and David Sanborn, as well as recording and touring with his own trio. Joey has won countless Downbeat critics and readers polls, and is recognized as the best Hammond organ player in jazz.

Robi Botos has won numerous international music competitions as well as National Jazz Awards in Canada. He has opened for Oscar Peterson and recorded and performed with artists ranging from Chaka Khan and Molly Johnson to James Blood Ulmer and Vernon Reid. Long hailed as one of Canada's elite horn players as well as a skilled composer, arranger and musical director, Phil Dwyer has won multiple Juno Awards(Canada's Grammy equivalent). He has performed with everyone from Aretha Franklin and Gino Vannelli to Randy Brecker, Jim Hall, Dave Holland, Dave Young, and Don Thompson. Powerhouse percussionist/composer Vito Rezza has released five albums with the band he leads, 5 After 4, and has recorded with Joni Mitchell, John Lee Hooker, Michael Brecker, Guido Basso and many others.

The choice of repertoire for the project was similarly spontaneous. Players of this experience and talent have a near-encyclopedic knowledge of the standards; that the six tracks captures for the recording showcase this group's potent combination of technical brilliance and musical empathy.

Mario Romano's recording debut, Valentina, marks the pianist's professional return to his life-long passion for music, after he spent four decades in the construction industry, eventually becoming one of the most important players in real estate development in Toronto. One of his firm's current projects, the L Tower at the Sony Centre, has, coincidentally, been lauded as “architectural jazz." Romano's interest in music never flagged, and his long-delayed musical dreams have come to fruition with the release of Valentina.

While it might be easy to dismiss such an outing as a wealthy businessman's vanity project, a listen to Valentina quickly disproves that theory. Romano, who emerged in the 1970s as a serious player on the Toronto scene after studying music composition and performance at York University, has remained a serious and committed musician whose talents as a both a pianist and arranger clearly emerge on his debut offering. The four players who make up his Quartet—saxophonist Pat LaBarbera (Buddy Rich, Elvin Jones), drummer Mark Kelso (Brian Hughes, Holly Cole) and label-mate bassist Roberto Occhipinti (Hilario Duran)— escalate Romano's work as a pianist and an arranger to the highest level.

Romano's three band mates and producer Peter Cardinali have recorded and performed together on dozens of occasions, and their musical empathy is clearly audible. Romano cites “Autumn Leaves" as an example of their collaborative approach. “Peter came up with a really good idea to cut the melody in half time, so now it is like a ballad being played over a Latin feel."

There's an elegantly understated quality in Romano's fluent playing that evokes the legendary McCoy Tyner. Roberto Occhipinti observed that quality, harnessing it for his composition “Via Romano." “We had been rehearsing at Mario's house and he played a McCoy Tyner kind of figure. I decided to use that as a starting point of a tune I'd write for him," notes the bassist. For his own composition,the sweetly haunting ballad “Those Damn I Love Yous" Romano called upon talented Toronto jazz vocalist (and Alma recording artist) Kristy Cardinali. “I just love her voice," he says. “It's very clean and pure, and she has a way of singing that's like whispering in your ear."

For additional information on One Take: Volume 4 and the Mario Romano Quartet's Valentina, visit the Alma Records website.