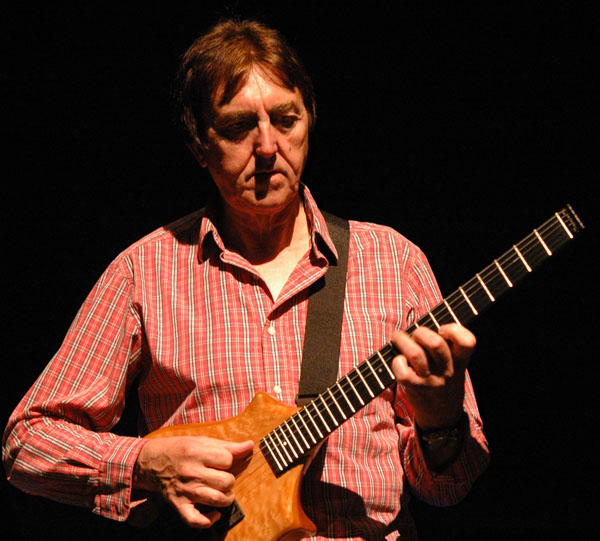 slideshow
MoonJune Records is once again proud to re-release another classic Allan Holdsworth album, FLATTire. The album is subtitled Music From A Non-Existent Movie, and easily qualifies as one of his most mysterious, yet introspective works. Originally released in 2001, the album had a small print run, received little notice and no fanfare.

Comprised predominantly of performances played on his beloved SynthAxe, Holdsworth delivers a set of stunningly beautiful, emotional tunes. “I had just gone through a difficult divorce and was experiencing a lot of pain and feeling very lost and introspective", Holdsworth said, when reflecting upon the circumstances which preceeded his making the album". I had always wanted to compose music for movies, but had never been given the opportunity," he elaborated.

“Whenever I watch a movie I like to imagine what sort of music I might compose for a scene, to create a particular kind of atmosphere, because when I see something I hear something. So, while recording FLATTire I tried to create these imaginary movies in my head and then write themes for them." In the same way that the more impressionistic and even orchestral-sounding compositions on FLATTire differ significantly from those on Holdsworth’s other albums, his performances and even his approach to playing his instrument also differed. “Most of the things I played weren’t particularly technical in the sense of requiring exceptional dexterity," he explained. “They were all about the emotion and staying true to the concept of supporting visual images. That’s very different than making a normal record, where the focus is just on a piece of music and soloing within that.

“While for more than a decade the original release has lingered in relative obscurity, this re-release finally provides a unique, essential work — from one of progressive music's greatest masters — with the attention and distribution it deserves. The album is presented in digipak format, with some new, engaging liner notes written by Guitar Player magazine's Barry Cleveland (portions of which were used herein).

Featuring a guest appearance on two tracks by the late, great jazz bassist Dave Carpenter, FLATTire is an album completely unique in the Allan Holdsworth discography — highlighting an entirely different side of his creative persona, as well as his genius as an engineer and producer. Don't miss out on this intimate personal statement from one of progressive music's finest treasures.