Allan Harris Returns to the Kennedy Center on September 28 & 29 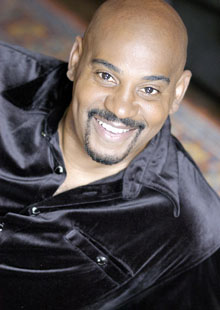 Vocalist Allan Harris will perform at the The John F. Kennedy Center for the Performing Arts, 2700 F Street NW, on Friday, September 28 and Saturday, September 29, 2007 at 7:30pm and 9:30pm. Tickets are $25. For more information, visit http://www.kennedy-center.org/. This show is a special celebration of Harris's brand new CD, Long Live The King, which will be available in stores on Tuesday, September 4, 2007. Long Live The King is a tribute to the late, great Nat “King" Cole, and was recorded live at The Kennedy Center.

“As the years rolled by, I have been compared favorably to the great Nat 'King' Cole," admits Harris. The New York Times' Stephen Holden called him “an extremely relaxed and tasteful crooner in the Nat 'King' Cole tradition" in his review of Allan's three-week engagement at the Algonquin's Oak Room in New York City. The Miami Herald wrote that Harris' voice and demeanor “project the warmth of Tony Bennett, the bite and rhythmic sense of Sinatra, and the sly elegance of Nat 'King' Cole."

In fact, his very first New York review in The New York Post read: “The Man Who Would Be Cole." At that time, Harris wasn't ready for such comparisons, but a few years later he was contacted by Camelot Productions in Israel to see if he'd consider doing a 10-day tour in tribute to Cole. The tour was a tremendous success - all 10 shows were sold out and the crowds demanded encores at every venue.

“So, when the Kennedy Center asked my manager if I would be interested in doing a tribute to Nat 'King' Cole for two nights, we both knew that a live recording would be a great way to capture the intimacy of the songs I wanted to sing," Harris recalls. These songs include Cole classics such as “L-O-V-E," “The Very Thought of You," and “Unforgettable."

Now, with his new CD release Long Live the King, Allan Harris finally pays homage to one of the most recognizable singers on the planet. Harris' romantically appealing voice reaches out with a heartbreaking depth that caresses the songs. By combining the best of the past with his unique gift to create something fresh and distinctive, Harris treats each of these classics, from “Nature Boy" to “It's Only a Paper Moon" to “(I Love You) For Sentimental Reasons," with his fullest respect.

Says Allan: “This 13 song tribute to Mr. Cole is my most heartfelt recording to date and a culmination of years of love and appreciation to those who were gracious enough to compare me to this remarkable man."