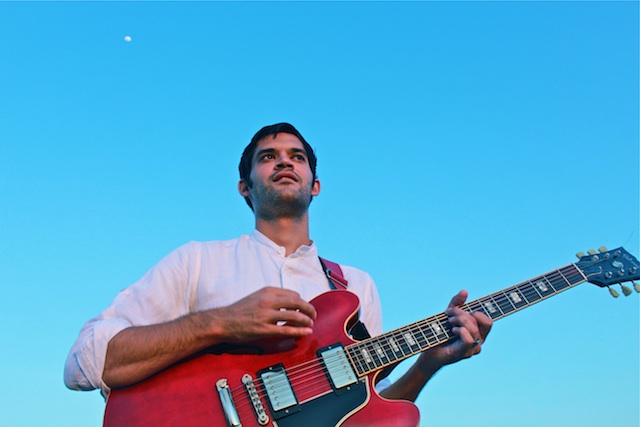 slideshow
Calarts Grad Alex Pinto has been busy since the release of his highly praised debut album Inner State (Pursuance Records) in 2011. The guitarist launched SF Offside, a Bay Area jazz and creative music festival, with music curator Laura Maguire in 2012. He was an active presence in the bustling Bay Area indie scene, collaborating with animator Jeremy Rourke, while also holding down bass and/or guitar duties in Magic Fight, Petejota and The Lawlands. Capping things off, Pinto was awarded a Fulbright Scholarship to study Carnatic (South Indian Classical) music in India in the spring of 2013.

His nine month journey in his father’s homeland was filled with intense study and reflection and has resulted in the dawn of a new project and self-titled EP: All India Permit , to be released November 4th on Pursuance Records. The music synthesizes Pinto’s singular approach to creating a hybrid of Indian classical music, modern jazz and the rock aesthetic of his youth, with Rez Abbasi, a mentor and significant inspiration praising Pinto’s upcoming release: “Alex's continued journey into Indian culture and music is resulting in some new and rewarding sounds!" With All India Permit , Pinto builds upon the promise of his debut recording and firmly presents himself as a guitarist and composer with a sound and vision for future cross-cultural musical explorations.

Pinto is joined by two of India’s brightest stars on the session - Tarun Balani on drums and Abhinav Khokhar on electric bass. “Alex’s music and his artistic vision for the All India Permit EP is grounded in a fearless exploration of new territories in Modern Jazz as well as Carnatic music,” says Berklee grad Balani, an avid composer, bandleader and educator with two releases already under his name. The trio recorded the EP at Cotton Press Studios in Mumbai, which sits in a restored cotton press warehouse from the 1860s. “Everyone played with a real focus and intent but we were all taking risks and having fun,” Pinto recalls. “Not to mention dealing with the heat! We couldn’t run the AC during the takes. I remember tuning my guitar sharp thinking ahead that the strings were going to go flat.”

The guiding principle for Pinto while creating this music was formulating a melodic, rhythmic and harmonic world where Carnatic and western elements could co-exist. “Camilla, the first track, is Radiohead meets Raga Gamanashrama. It’s a beautiful raga with no western equivalent but I think the driving nature of the chords and the sounds we’re after as a trio ground it in something familiar.” To Jodhpur, the second piece, was inspired by his wife’s 30 hour train ride from the south east of India to the deserts of Rajasthan. “Train rides in India are magical. You’re in the same car, but the landscapes change so dramatically from state to state.” Continuing, “You can’t really ever get bored. There is too much going on. I wanted to achieve the same effect with this piece - a constant or similar melody, over new harmonies and meters.” The EP closes with the meditative Karnataka, a droning tribute to his father’s homestate. “We were visiting the family home and this riff popped into my head. It’s based on raga Sree, the Carnatic version, and it gives us some space to really push melodically and rhythmically. We just rocked out.”

Settling in the Pacific NW, Pinto will be supporting the release of the EP with shows at Studio Grand Nov 6th (Oakland), Blue Whale Nov 9th (Los Angeles), Vermillion Nov 12th (Seattle) and Somethin' Else Nov 17th (New York City). The EP will be available for digital download at iTunes, Amazon MP3 and other major destinations plus the group’s website.