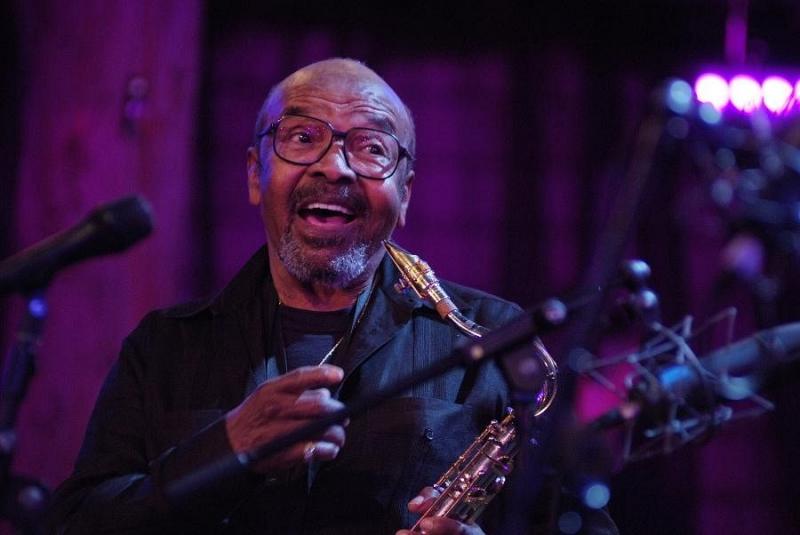 slideshow
“I’ll remember April, and I’ll smile,” sang Frank Sinatra, who would have made a great pitchman for New Jersey’s role in Jazz Appreciation Month.

April brings good reason to smile in the State’s jazz circles, but the proud epicenter is Newark, which practically claims parental rights to many jazz royals. Jazz’s triple crown in the downtown are the expansive archives of the Institute of Jazz Studies at Rutgers, WBGO Jazz 88.3FM – the country’s leading jazz station – and NJPAC, where venerated artists intersect with young talents in practice and performance.

Nearly 18 years ago, trumpeter Wynton Marsalis and the Lincoln Center Jazz Orchestra sounded the first bluesy notes in freshly minted Prudential Hall, a kind of fanfare for the performers to come. Nina Simone – the “High Priestess of Soul” – and pianist Keith Jarrett, long missing from the stage during career breaks, rebooted with performances at NJPAC. Pianist and harpist Alice Coltrane, Dave Brubeck – another keyboard master – and tenor saxophonist Sonny Rollins all made appearances. Chick Corea, Terence Blanchard, Dee Dee Bridgewater and the patriarchal George Wein, founder of the Newport Jazz Festival … the list grew, along with the participation of many of the musicians in related activities at NJPAC, such as mentorships and classes.

The other 11 months of the year are hardly ignored, however. Every Fall, the week-long TD James Moody Democracy of Jazz Festival showcases home-grown up-and-comers and internationally recognized artists in an array of concerts. At the last event in November, music lovers heard Vince Giordano and the Nighthawks dig into Duke Ellington, Jimmy Heath as he let his sax resound in Bethany Baptist Church and jazz mixed with samba, courtesy of Sérgio Mendes. The annual celebration wraps with the Sarah Vaughan International Jazz Vocal Competition, recognizing outstanding women vocalists and “Sassy” Vaughan herself, a Newark icon who was discovered at a talent contest at the Apollo Theater. This year’s contest will be announced on April 1.

Of course the festival’s namesake is venerable saxophonist James Moody, a longtime Newarker who as a young man ran the bebop sessions at Lloyd’s Manor. His signature piece, “Moody’s Mood for Love,” “used to be on every jukebox in the old Third Ward” (now the Central Ward), says jazz author Barbara J. Kukla, former longtime editor of the Newark This Week section of The Star-Ledger. Her latest book is America’s Music: Jazz in Newark.

Kukla says Newark was home to five major breweries and, as a manufacturing center, held the promise of employment and a lower cost of living for poor Southern blacks venturing toward New York. “Because it was a beer town, in 1935 there were 1,100 taverns,” she notes. “If you wanted to sell beer, or even illegal hooch during the Depression, people would bring in piano players, maybe a trio. Live entertainment was big.”

By the 1940s, Newark had come into its own as a welcoming jazz mecca in the shadow of Manhattan’s skyline. All the big bands –Ellington, Count Basie – were booked for long engagements at Symphony Hall (“The Mosque”) or the Adams Theatre. As the years unrolled, Willie “The Lion” Smith became a legend of stride piano. Another pianist, Mary Lou Williams, performed at Queen of Angels Church and Charlie Parker and “Fats” Navarro turned up at Savoy Records on Ferry Street. Melba Moore’s stepdad, pianist and singer Clem Moorman, played the Picadilly and saxophonist Wayne Shorter learned his craft in the halls of Arts High.

Kukla was introduced to Newark’s jazz milieu by singer Viola Wells (“Miss Rhapsody”), also a recording artist at Savoy. Miss Rhapsody was cited by Newark blues singer Carrie Smith as one of her two greatest influences, the other being Bessie Smith (who frequently performed at the blacks-only Orpheum Theater at Washington and Court streets). Jazz nightlife found a new home at NJPAC when it opened in 1997.

Today, three curators with a strong allegiance to the music – bassist Christian McBride, pianist Bill Charlap and “jazz advocate” Dorthaan Kirk – advise on programming year-round. During Jazz Appreciation Month, Jazz Songbook with Bill Charlap presents Echoes of Harlem: Duke Ellington, with a lineup that includes Charlap with Ernie Andrews, Renee Rosnes, Houston Person and others, on April 5. The following day, trumpeter Hugh Masekela, who has collaborated with Marsalis and his orchestra, gives two performances as part of his 75th Birthday Tour in Honor of Mandela.

Jazz is appreciated every day in Arts Education, where the Brick City Jazz Orchestra, an ensemble of Greater Newark’s most musically gifted high schoolers, is based. The Wells Fargo Jazz for Teens program, where students learn and perform side by side with professional musicians, is also a big part of the vibe. This summer, pianist Geri Allen will lead a week-long All-Female Jazz Residency for 14- to 22- year-olds. The Sarah Vaughan Jazz Vocal Residency, open to female students of Arts High School – Vaughan’s alma mater – takes place for eight weeks each year and culminates in a performance at the Center for Arts Education.

Cross beneath the street sign for Sarah Vaughan Way, just outside NJPAC’s front door, and you’ll find WBGO, which celebrates its 35th birthday on April 9. The jazz station is planning a host of special events, including a free concert with the Peter Bernstein Trio at Newark’s Gateway 2 on April 2 and a gallery reception for the artist Ramsess at its Park Place studio on the following day. The Jazz Appreciation Month (JAM) Student Ensemble Festival is scheduled for broadcast on International Jazz Day, April 30, from 10am to 2pm. On April 10, WBGO marks its anniversary in a benefit concert and meet- and-greet with Chick Corea at Manhattan’s Town Hall. The 22nd season of the award-winning, free Kids Jazz Concert Series takes place now through May 3, 12:30-1:30pm, at venues throughout the state.