SOURCE: ALL ABOUT JAZZ PUBLICITY
March 17, 2019
Sign in to view read count

The Montréal Audio Fest brings in more than 5,000 visitors who want to hear, see and touch over 300 brands of audio products under one roof. It’s the biggest get-together of audio-video industry manufacturers, distributors and retailers in Canada. 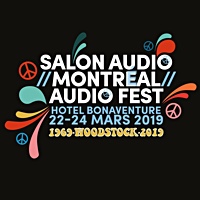 Audiophiles of all price ranges ahoy! All About Jazz will cover the 32nd Montreal Audio Fest, running March 22-24, 2019, with a series of interviews, music and more as Video of the Day from Saturday, March 23 through 29.

With a 2019 theme celebrating Woodstock's 50th anniversary, the 2019 Montréal Audio Festival will take place over four floors of the city's downtown Bonaventure Hotel (recently renovated to celebrate its own 50th anniversary). Featuring more than 300 brands of audio products, it's the country's largest event for audio-video industry manufacturers, distributors and retailers, with show rooms demonstrating systems ranging from $1,000 to $1,000,000. Presented by Martin Logan, the festival will also feature, for its second year, Audiofilles, a group of women who, according to the festival's website, “share the same passion for music and have discovered a new passion for the audio equipment that they want to share..."

Longtime AAJ contributor John Kelman will be making his video debut, winding his way through the event as the video series' host, stopping to interview a selection of equipment manufacturers and sample some of the systems with jazz music dating back to 1969 (to coincide with the festival's Woodstock @50 theme) to current releases...maybe even some music yet to be released. He'll be wandering the festival with director/producer François Philippe Soutif and Cinematographer Natasha Sher, who will capture the sights, the sounds and the energy and excitement of the Montréal Audio Fest.

The series, a collaboration by All About Jazz and production companies Sur Place Media, will be hosted on AAJ's YouTube channel, with a new video released every day for a week as Video of the Day, along with an additional collection of videos that will augment the seven main episodes.

Join John for his week-long coverage of an event that, anticipating over 5,000 attendees, will shine spotlights on some of the world's best audio- video gear, with systems ranging from those that anyone can afford to some that...well, almost nobody can afford!