After playing with artists such as Ivan Lins, Hermeto Pascoal, among others, the Brazilian drummer, from Rio de Janeiro, releases Jazz Standards, his 12th solo album, dedicated to classic jazz, with reinterpretations of 'A Night in Tunisia', 'Cherokee', 'Lazy Bird' and 'Caravan' &#151Fabio Cezanne 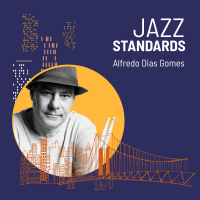 The free style of playing, innate to jazz, was already a notorious characteristic of the drummer when he recorded, at the beginning of his career, the iconic “Cérebro Magnético”, by Hermeto Pascoal. A little earlier, at 16, Alfredo took classes with American drummer icon and percussionist Don Alias, who recorded Miles Davis legendary album Bitches Brew. “We were in the '70s and, to Don's surprise, I was perfectly familiar with those rhythms”, remembers Alfredo. “Then he gave me jazz exercises, and it was completely unlike anything I had ever played. The conduction of the rhythm was not in the bass drum and snare, but in the cymbal and hi-hat, bass drum and snare always played in advance, always creating, without a defined, free pattern!”, he adds. And it was precisely this conception of playing “free” that helped him with Hermeto Pascoal next, applying the jazz language with Brazilian rhythms. The influence of jazz, especially of standards, is largely due to his participation in shows with trumpet player Márcio Montarroyos, when, in fact, he played standards for the first time.

In the 2000s, the pianist Lulu Martin, his friend, called him to perform in small jazz houses, an unprecedented experience, since he played in big theaters, gymnasiums, open-air festivals, always loud, for many people, unlike traditional jazz “gigs”, with the need to play lower, with few drums parts and often without any rehearsal. Classic jazz was present in most of his solo albums, but never so exclusively, since fusion and jazz rock, with their mixes of rhythms and timbres, were the keynote of his reinterpretations or authorial compositions. This time, Alfredo Dias Gomes finally releases his first album, literally, as a legitimate jazzman.

Born in Rio de Janeiro, in 1960, Alfredo Dias Gomes made his professional debut in instrumental music at the age of 18, playing in the band of Hermeto Pascoal. He recorded the album “Cérebro Magnético” and played in countless shows, highlighting the “II Jazz Festival of São Paulo” and “Rio Monterrey Festival”. Alfredo played and recorded with great names of instrumental music, brazilian music and rock artists, such as Márcio Montarroyos, Ricardo Silveira, Arthur Maia, Nico Assumpção, Ivan Lins, Lulu Santos and was part of the group Heróis da Resistência.