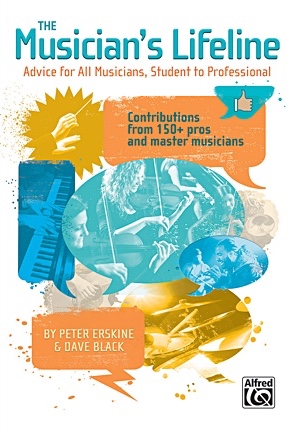 Alfred Music, the leading publisher in music education since 1922, announces the release of The Musician's Lifeline: Advice for All Musicians, Student to Professional. Written by Peter Erskine and Dave Black, The Musician's Lifeline represents the combined experience and knowledge of the authors gained through their lives in music. In addition, it includes advice from over 150 of the best musicians the authors have the honor of knowing, with topics ranging from sight-reading, learning, listening, auditions, the music business, practice, musical aesthetics and performance, to general travel and life wisdom.

The Musician's Lifeline is available for $16.99 at music retail stores, online retailers, and alfred.com.

Review copies are available upon request.

Peter Erskine has played the drums for sixty years. He appears on over 700 albums and film scores, has written 12 books, has won two GRAMMY Awards, and is the recipient of an Honorary Doctorate from Berklee College of Music. Over 50 albums have been released under his own name or as co-leader. He’s played with Stan Kenton, Maynard Ferguson, Weather Report, Steps Ahead, Joni Mitchell, Steely Dan, Diana Krall, among others, and has appeared as a soloist with the Los Angeles, Chicago, London, Oslo, Helsinki, BBC, and Berlin Philharmonic Orchestras. Peter graduated from the Interlochen Arts Academy and studied with George Gaber at Indiana University. He is currently the Director of Drum set Studies at the University of Southern California and continues to maintain a very active playing and recording career.

Dave Black received his Bachelor of Music in percussion performance from California State University, Northridge. A prolific composer and arranger, more than 60 of his compositions/arrangements have been published/recorded by several of the major music publishers. Many have been used as source/background music on numerous TV shows and movies, including the film Drumline. He is the recipient of numerous awards and commissions, including 26 consecutive ASCAP Popular Composer Awards, two GRAMMY participation/nomination certificates, the Percussive Arts Society President’s Industry Award, a Modern Drummer Readers Poll award, two Drum! Magazine Drummie! awards, and a certified Gold Record award for the sale of more than 500,000 copies of Alfred’s Drum Method, Book 1. As one of the biggest-selling percussion authors in the world, he is the author and/or co-author of over 30 books with combined sales now totaling over two million units.

Alfred Music, the leader in music education for over 95 years, produces educational, reference, pop, and performance materials for teachers, students, professionals, and hobbyists spanning every musical instrument, style, and difficulty level. Alfred Music’s home office is located in Los Angeles, with offices around the world, including Germany, Singapore, and the United Kingdom.

Alfred Music is now also paired with MakeMusic, which is part of Peaksware Holdings, LLC portfolio of companies, to transform how music is composed, published, taught, learned, and performed by bringing together the leaders in educational music publishing and music technology.