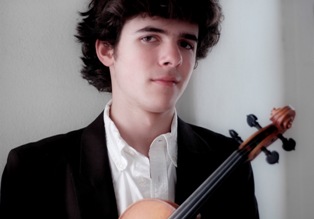 Berklee College of Music and the Monterey Jazz Festival have announced that award-winning violinist and Adventure Music recording artist Alex Hargreaves is the fourteenth recipient of the Jimmy Lyons Scholarship at Berklee, a major music education prize. The full-tuition scholarship is named in honor of the festival's late founder, James L. (Jimmy) Lyons, who began the festival 53 years ago with jazz education at its core.

The Lyons Scholarship is awarded each year to one music student in recognition of their outstanding talent. Previously restricted to student musicians from the state of California, this year marks the second time the scholarship competition has been open to young musicians from the Western United States. Because it is a full-tuition, renewable award, satisfactory academic and musical progress in each successive year will allow each Lyons Scholar to attend Berklee through graduation, entirely tuition-free. Previous Lyons Scholars include saxophonist Dayna Stephens (Kenny Barron), drummer James Williams (Gary Burton), cellist Rushad Eggleston (Crooked Still, Fiddlers Four), and drummer Thomas Pridgen (The Mars Volta).

This September, in pursuit of his passion for jazz and improvisational-based music, Hargreaves will begin his studies at the Berklee Global Jazz Institute. Under the artistic direction of world-renowned pianist Danilo Perez (Dizzy Gillespie and Wayne Shorter), this new program admits only a handful of students each year, providing them with the opportunity to work one-on-one with a select group of Berklee faculty, including Perez, Joe Lovano, George Garzone, Terri Lyne Carrington, and Jamey Haddad.

Hargreaves will sit in with his new classmates in the Berklee Global Jazz Institute on Friday, September 17, at 8:00 p.m. on the Garden Stage, and again on Saturday, September 18, at 5:00 p.m., in the Coffee House Gallery.

Monterey Jazz Festival Trustee Carsbia Anderson, chair of the Festival's Education Committee, and Dr. Larry Simpson, Berklee's Senior Vice President for Academic Affairs, will make the Lyons presentation to Hargreaves at the festival on Sunday, September 19, at 2:00 pm, on the Jimmy Lyons Stage.

Berklee College of Music was founded on the revolutionary principle that the best way to prepare students for careers in music was through the study and practice of contemporary music. Since 1945, the college has evolved constantly to reflect the state of the art of music and the music business. With over a dozen performance and nonperformance majors, a diverse and talented student body representing over 70 countries, and a music industry “who's who" of alumni, Berklee is the world's premier learning lab for the music of today&#151and tomorrow.

At the age of 18, Alex Hargreaves has already received countless honors including the Daniel Pearl Memorial Violin from Mark O'Connor's Strings Conference, and the Alternative Styles Award from the American Strings Teachers Association (ASTA). Alex is also the youngest ever (age 15) to win the Grand Champion division at the National Oldtime Fiddlers' Contest in Weiser, Idaho, and in 2009, won the Grand Masters Fiddle Championship in Nashville and performed on the Grand Ole Opry.

In February, 2010, Alex's debut album, Prelude, was released on Adventure Music, featuring master acoustic musicians Mike Marshall, Grant Gordy and Paul Kowert, as well as special guests Bela Fleck and Noam Pikelny. Prelude portrays Hargreaves' maturity not only as a cross-genre violinist and improviser, but also as a composer, with his original compositions comprising half the album.

Hargreaves' playing on Prelude has already been acclaimed by critics and musicians alike. David Grisman comments, “[Alex] plays with wit, authority and soulfulness belying his years. In my opinion, he's destined to be one of the fiddle giants of the 21st century." For Mike Marshall, Alex is “arguably one of the greatest improvising violinists in America today" and Matt Glaser, artistic director of Berklee College of Music, American Roots Program, simply states, “Truly, Alex Hargreaves is the best young jazz violinist in America."

Critical acclaim for Prelude includes the All Music Guide, which stated that Alex's “pure, raw talent is undeniable," and Jazz Times, which said “Hargreaves has chops to spare, but his virtuosity is characterized by fluidity rather than flash. His tone is singing and soulful...." The venerable folk magazine Sing Out stated, “He plays his violin with all the soul, grace and depth as that of an old master."

An active performer, Hargreaves has played on stages around the world including Austin City Limits, Hardly Strictly Bluegrass Festival, Merlefest, Rockygrass, Wintergrass and the Mandolines De Lunel Festival in Lunel, France, as well as venues in Canada and Italy. He is a member of world-renowned mandolinist Mike Marshall's Big Trio, along with bassist Paul Kowert (Punch Brothers). The Big Trio toured extensively following the 2008 release of their self-titled album on Adventure Music. In addition, Alex often performs with singer and multi-instrumentalist, Sarah Jarosz. He appears on her critically acclaimed album, Song Up In Her Head (Sugar Hill Records), and is featured on her Grammy-nominated instrumental, Mansinneedof.