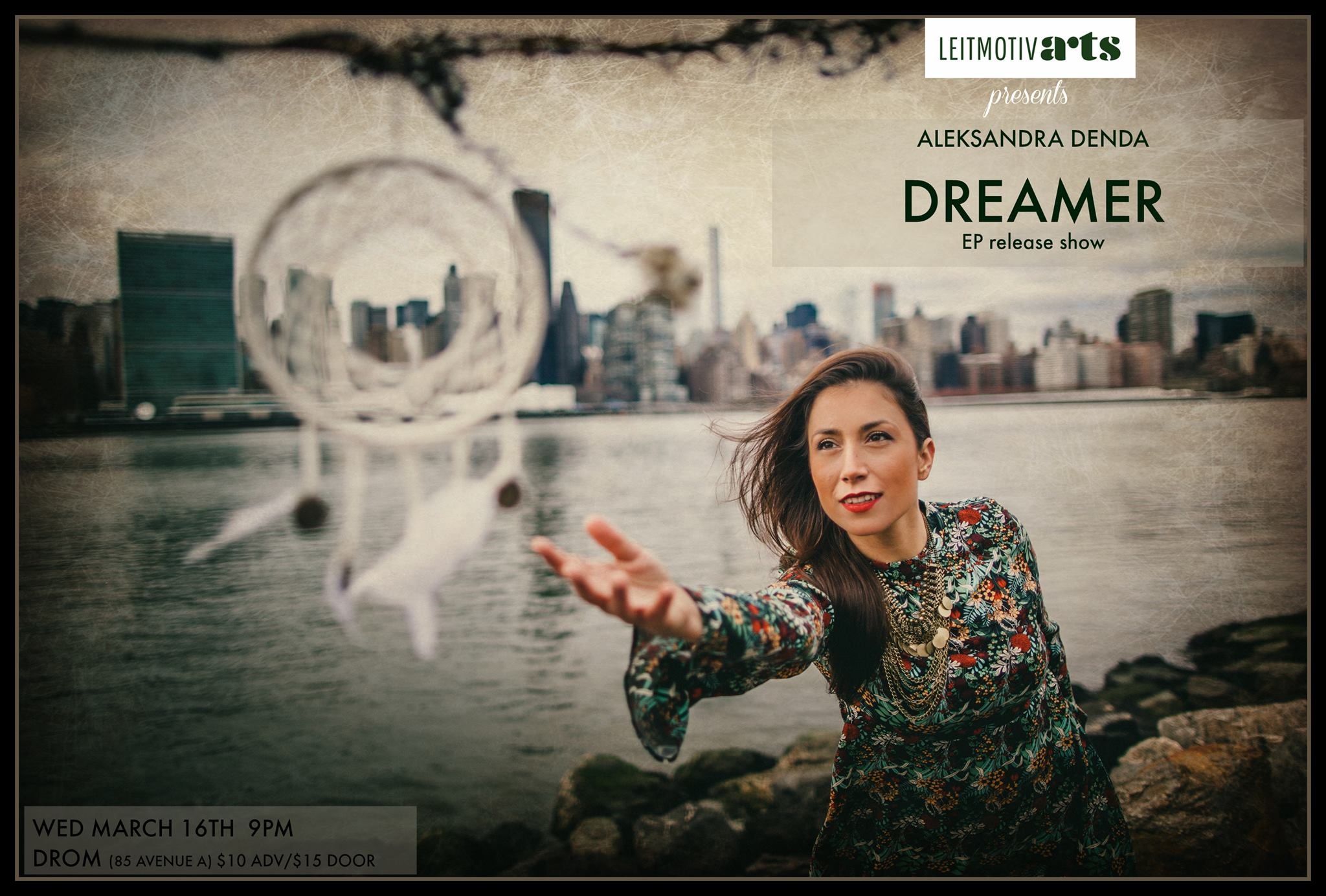 slideshow
LeitmotivArts is thrilled to announce the release of the debut EP Dreamer from Aleksandra Denda available worldwide on March 17th 2016.

Two years after having her single “In the Dark" selected as The Song Of The Day on Jon Oliver's The Main Ingredient Radio, Aleksandra releases her debut EP. Dreamer—wonderful patchwork of acoustic and electronic elements, intertwining Neo Soul, Jazz, World Music and Electronica into Aleksandra's own ethereal sonic canvas.

Dreamer is a luscious six-track introduction to the distinctive artistry of this Serbian native, as her sultry voice daydreams about the perfect lover, forgiveness, inner bliss and artists’ place under the sun. Aleksandra’s enchanting blend of celestial harmonies, captivating melodies and insightful lyrics will undoubtedly speak to all those seeking for truth and authenticity in music.

Recorded in Boston, all songs on the were written by Aleksandra and produced by the innovative, LA-based producer Giosue Greco; apart from the collaboration with Indian singer-songwriter Vasuda Sharma on the single “Already Here", that immediately picked up support from India's MTV and Rolling Stone Magazine after its video release on February 29th.

After performing across NYC at the variety of humanitarian events organized by Leitmotiv Arts, the established arts organization and Aleksandra deepen their collaboration through other musical occasions, including the release show of her debut EP Dreamer, scheduled for March 16th at 9pm at DROM in New York City East Village.

Joining Aleksandra’s regular rhythm section as a special treat for this unique performance, are a 4-part horn section, a duo of captivating back vocalists, and some surprise guests.

Besides the music from the EP, Aleksandra and her international 10-piece band will also perform some unrecorded material.

Aleksandra Denda is an internationally recognized, New York-based vocalist, bandleader and songwriter. Besides performing, recording and touring throughout USA, Europe and Asia, she performs steadily on the East Coast as a leader and as featured artist in the wide array of musical genres, spanning from Soul to World Music, Brazilian, R&B, and Jazz. Some of these projects include performances with American Idol's Michael Lynche (aka Big Mike) as his background vocalist, recording with the flamenco star Jose Merce on the Latin Grammy nominated album Mi Unica Llave, and co-founding ROSA-the only traditional Serbian all-female a cappella group on this side of the Atlantic.