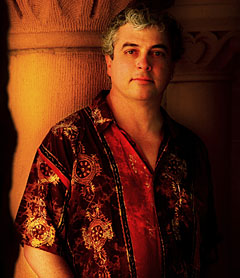 The concept of flow is a far reaching and powerful idea when related to musical performance. At its essence, it taps into the thought of moving from one place to another, on a physical, developmental, and artistic level. All of these types of flow occur within any group of musicians that stay together over a long period of time. Each musician flows into physical changes, gaining new technical skills on their instrument that push their music. Exposure to new ideas and indulging in experimentation inspire new ideas and internal thoughts about artistic approach, flowing into developmental changes. The flow of time forces us into evolution, guaranteeing that we become a different artist than we were at our starting point. One individual experiencing the strength of these changes can make a deep artistic impression; when a group of musicians follow these types of flow together, the impact is multiplied tremendously. After more than fifteen years, Jovino Santos Neto and his Quinteto show the results of their flow as a group on Current, a solid collection of Brazilian Jazz.

Far Reaching Artistry And Cohesion As A Quintet

The core quintet is featured on several tracks, showing the far reaching artistry and cohesion as a unity. Neto establishes a funky strut with a vamp on Fender Rhodes, giving “Corrente (Current)" a reggae edge, which gets a subtle tension from saxophonist Harvey Wainapel's rhythmic melody. The saxophonist falls into the groove with his improvisation, slowly building into a climax with tense melodic lines, followed by Neto's bluesy electric statement. Percussionist Jeff Busch leaps into a fascinating solo, pulling a variety of sounds from the berimbau, and after a return the melody, drummer Mark Ivester develops a colorful rhythmic idea over a vamp. Bassist Chuck Deardorf solos freely over a collection of drum textures, making way for an up-tempo groove on “Two Friends, True Friends." Wainapel's spacious melody intertwines beautifully with scatted vocals from Lena Simon and Caroline Corcoran until the saxophonist launches into a lyrical improvisation that skillfully plays upon the song's lush texture. The band quiets to a whisper behind Deardorf, who builds a running stream of melodic ideas that lead smoothly back into the melody. Wainapel leads the band into a driving bossa nova on “Outras Praias" with a rich melodic idea that flows cleanly over Neto's rhythmic comping. The pianist spins winding melodies that cur through the harmony with a jazz flair and bounce around the rhythm in a syncopated fashion. Deardorf skillfully develops a strong idea, thoughtfully running connected thoughts and rising melodic sequences over the whole spectrum of his bass. The deep rich tone of Wainapel's unaccompanied clarinet sounds with a bluesy seriousness on “A Fonte (The Source)," taking on a solemn reflective quality as the band falls into place behind him. A repeat of the melody allows Wainapel to further elaborate on the main theme while the band builds the emotional depth of the song. Neto follows with an introspective improvisation that reaches into the inner edges of the music, emerging with a personal statement that completes the performance. Neto and his group fluently move through several different stylistic approaches on these tracks, showing impeccable teamwork and creative interaction at every turn.

An Inspired Addition To The Group

Vibraphonist Ben Thomas joins the group on several pieces, adding an inspired element to the group. Ivester and Busch leap into a driving samba groove on the introduction to “Vivendo No Presente (Living In The Present)," which serves as a launching point for an energetic melody from Wainapel and Thomas. Neto plays upon the addictive feeling of the song with an enthusiastic improvisation that overflows with rhythmic vitality and interesting melodic shapes. Wainapel tears into his solo with a serious edge, blazing right into Thomas' improvisation that come alive as the percussive nature of his notes blend with the rhythm section. A combination of percussion and clapping establish an edgy rhythmic foundation for a precocious melody on “Matraca (Rattle)," that explodes forward with an unstoppable power. Neto engages in an overdubbed flute dual with himself, that cleverly builds the song's motion with smart intertwining lines. A sudden stop break opens the door for a ferocious solo from Wainapel, who cuts through the band's groove with a forceful series of bop fueled runs. Thomas delicately introduces “Zagaia (Spear)" with an unaccompanied solo that suddenly falls into an unabashedly funky groove. A winding melody leads into an edgy solo from Neto, who assertively plays off the song's charging groove, until Wainapel races into a strong series of cutting lines. The combination of melody and percussion on Thomas' solo make the vibraphonist's idea leap from the music, while Deardorf digs deeply into the song's funky soul with a slippery electric bass solo. A unison melodic explosion from Neto, Wainapel, and Thomas lead into a flowing melody on “Sea And Sky." A long and winding line shared between Wainapel, Thomas, and Neto's melodica set the stage for thoughtfully constructed improvisation from Wainapel. Neto jumps into a lively solo on melodica, making his way through the changes with a smart collection of melodies that play off interaction from Thomas and Ivester. Thomas asserts his voice strongly on these tracks, and the group responds enthusiastically, playing off his performance with a evident excitement.

Neto and his Quinteto deliver an outstanding performance on Current, full of imaginative and interactive playing that comes from years of collective flow. As a bandleader, Neto supplies direction and freedom in a free flowing way, constantly serving as a bright and powerful creative spark. It's a wonderful duality that makes his music come alive—his artistry is in clear focus while simultaneously being open to new ideas. Neto's compositions provide a wide variety of textures and harmonic colors, with moods ranging from playful to deeply introspective. The band reacts to each setting with vivid engagement, obviously enjoying the thrill of the far reaching musical journey. Wainapel is a perfect complement to Neto's powerful artistic personality, enthusiastically exploring the full range of Neto's composition and asserting his own personality in a bold yet tasteful manner. Even though he joins the group as a guest, Thomas is a perfect fit among the musicians—his lyrical percussive voice is a fantastic layer. Deardorf plays with authority and insight, working well as both a support person and a smart soloist. Ivester and Busch support the group with creativity and knowledge, tapping both into authentic grooves and colorful percussion techniques. The combination of all these elements makes Current an inspired Brazilian Jazz statement, showing a snapshot of Neto and his Quinteto, a group that has flowed through a collective growth into musical maturity.