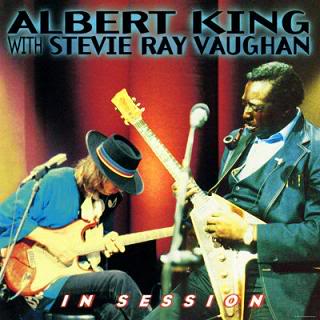 LOS ANGELES, Calif.—PBS has announced that the Albert King with Stevie Ray Vaughan — In Session program will air as a special on its stations beginning November 27 and throughout the month of December (check local listings). Grammy Award winning bluesman Robert Cray will serve as special fundraising host on the public television broadcasts.

In 1983, when legendary blues guitarist Albert King, then age 60, was joined by his disciple Stevie Ray Vaughan, then age 29, on a Canadian sound stage for the live music TV series In Session, magic took place. Albert King with Stevie Ray Vaughan In Session is not simply a television program: it's a summit of two master musicians. The only known recording of King and Vaughan performing together, this is the concert that blues fans in general, and Stevie Ray Vaughan fans in particular, have been waiting for.

The audio recording of the performance went on to sell more than 325,000 units from two releases: the first in 1999, the second in 2009. On November 9, 2010, Stax Records, a division of Concord Music Group, released In Session as both a DVD and a deluxe DVD/CD combination.

SonicBoomers.com noted: “Both men are gone now, but rare recordings like In Session remind us of a time when blues giants still walked the earth side by side."

“As a document of what was probably the greatest night in the musical life of SRV (Stevie Ray Vaughan), this belongs in the collection of every true fan," said the Austin American- Statesman. Musicologist Samuel Charters says in his new liner notes for the package, “it's also clear, nearly 20 years later, that this was a special moment in the careers of each of the two men. It was evident from the first choruses that they were playing for each other. And that was the best audience either of them could ever have."

An hour and 45 minutes, approximately, was taped of the two. What will thrill viewers who are fans of the blues, players of the blues, and who adore SRV, is that the televised concert includes at least one SRV tune—"Texas Flood"—that was not included on either of the two CD releases of the session.

The innovative Canadian television series was conceived with the intention of pairing musicians who were related stylistically, but seldom had an opportunity to play together. Albert King wasn't sure whom he'd been booked to jam with on December 6, but he recognized the young Texan immediately—not as fast-rising star Stevie Ray Vaughan, but as Little Stevie, the skinny kid who'd been coming around and eventually sitting in every time Albert passed through Austin.

Stevie idolized Albert, as did many other “modern" electric axe-men. Albert may have been overshadowed by B.B., but Jimi Hendrix, Keith Richards, Eric Clapton, Robbie Robertson, Mick Taylor, and Joe Walsh&#151all of them listened to him, listened again and again, and were heavily influenced by his style.

At the time of the taping, the buzz may have been around Stevie, but Albert was clearly in charge of the music. Earlier in the year, in May, David Bowie's “Let's Dance" featuring Stevie at his blistering Albert King-inspired best, hit the top of the Billboard pop singles chart; in June, SRV's debut album Texas Flood came out, and MTV put “Pride and Joy" into their rotation. He never looked back.