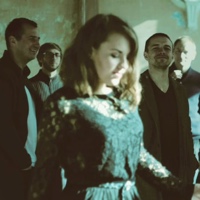 slideshow
It's not everyday you hear about musicians from Latvia. Alaska Dreamers have crafted a sound that is accessible and powerful at the same time. What started as the experimental music duo of Reinis Ozolins and Rudolfs Dankfelds would grow into something much larger, to become the ambitious mob of a band that they are today. Fronted by vocalist Kristine Praulina, Alaska Dreamers already have a collection of songs and touring experience under their belt, not to mention an amazing video for their song “About You" (view below) that has recently come out.

If you're into folk, jazz, or even soul and R&B, you may love Alaska Dreamers. First of all, the singer, Kristine, has a beautiful voice and might easily remind you of one of the biggest musical stars in the world, Adele. Kristine brings an emotion and message that easily breaks the standards set by modern pop-music. Backed by an array of talented musicians, Alaska Dreamers brings power in their instrumentation. In the song “About You," instruments like guitars, drums, piano, and horns, all play apart in building to an amazing climax in the song that might just pull on your heart a bit. Also what's so great about this band and especially this song is that they all make an appearance in the music video, which was shot in just one take!

The video starts with Kristine walking out of the pouring rain into a pub. Immediately grabbing the mic she's handed, she gets right to singing. Since there are upwards of ten band members, possibly all making an appearance in this one-take video. Drummer and original member Rudolfs can be seen early in the video, and you will also notice the guitarists, also because of the major effect they have on the song, courtesy of Marcis Vasilevskis, Janis Rungis, and Janis Kalnins. Just like the guitarists, the horns by Oskars Ozolins, Kristaps Lubovs and Laura Rozenberga all add their respective flavor to the track, and are all important pieces to this band. Not to mention pianist Ritvars Garoza who does his thing, adding uplifting keys to the loving track.

The video certainly has an atmosphere to it. Actually filmed and recorded at the Kanepes Kulturas Centrs in Riga, Latvia, the band performs live to perfection as bystanders sit by enjoying the music on a foggy, almost smoky casual stage. The fact that the video for “About You" is performed live and is a one-shot video is just so impressive that you tend to have trouble focusing on just how talented they are at their craft.