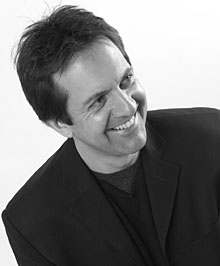 Additionally, USC Thornton is introducing to its wide range of undergraduate degrees a Bachelor of Arts in Vocal Jazz, which will be overseen by Kathleen Grace and Kristin Korb.

“As the new jazz studies chair, Alan brings to the department years of invaluable experience at the highest musical level," Says Cutoetta. “He is as passionate about teaching as he is about performing. In the seven years he's been on the faculty, he has invigorated the department with his fresh and forward-looking approach to teaching. I don't think there's a chair of a jazz department in the world who has as broad experience as Alan does. He has scored major motion pictures, is well entrenched in the LA recording scene, and has played with artists as varied as Michael Brecker, Jack DeJohnette, Dave Holland, Tony Williams, Santana, Bob Dylan and Queen Latifa. 'All About Jazz' hails Pasqua as a 'supernova' with 'flat-out blistering skills as a pure player.' It is an honor to chair the jazz department," said Pasqua. “The faculty is truly outstanding, and Thornton's jazz students constantly amaze me with their ability to articulate the music at a very high level"

Acclaimed saxophonist and composer Bob Mintzer, top recording artist noted for his work with the seminal Yellowjackets and Jaco Pastorius's fabled Word of Mouth Big Band, assumed the prestigious post of Bowen H. “Buzz" McCoy and Barbara M. McCoy Endowed Chair in Jazz in 2008. Mintzer also leads the Thornton Jazz Orchestra, an ensemble that concentrates on the hard swinging style of the classic big bands. The flagship of Thornton's jazz studies department, the ensemble performs worldwide at jazz festivals, as well as for marquee television and live performing arts events.

Grammy Award-winning drummer Peter Erskine, who has appeared on more than 500 albums and film scores, was appointed Assistant Professor of Jazz Studies in 2008. He will do double duty, teaching in both the popular music and jazz studies departments. Erskine also heads the school's new Roland Drumlab, a state-of-the-art lab that opened in spring 2009 and features 10 TD-9 V-Drum kits and a teacher/matrix station.

Other news in the jazz studies department is the addition of a Bachelor of Arts in Vocal Jazz. Heading the program are Kathleen Grace, who holds a master degree in jazz studies from Thornton one of the most exciting newcomers on the scene today blessed with a sound as pure as a bell ringing" (NBC) and Kristin Korb “a premiere singer with a personal approach and a deep sense of swing" she transports you to other worlds" (All About Jazz).

With one of the first free-standing jazz studies departments in the nation, USC Thornton is a pioneer in the development of an academic curriculum dedicated to the only truly American musical art form. The goal of the jazz studies department is to prepare talented young musicians for prominence in the professional performance arena.

About the USC Thornton School of Music

The University of Southern California's Flora L. Thornton School of Music, founded in 1884 and currently celebrating its 125th Anniversary, is the oldest continuously operating cultural institution in Los Angeles. It consistently ranks among the top one percent of the nation's music schools and conservatories, with a unique combination of innovative programs such as popular music performance, recording science, and scoring for motion pictures and television, as well as a long and illustrious tradition of classical music performance studies in all major instruments.

Featuring a student/teacher ratio of 6:1 and blending the rigors of a traditional conservatory-style education with the benefits of studying at a leading research university, USC Thornton offers students an unparalleled music education in a real-world context. Graduates consistently attain key positions with a multitude of major ensembles, recording studios and businesses in the music industry.

In 1999, philanthropist Flora L. Thornton became the school's benefactor with a naming gift of $25 million, at the time the largest such contribution to an American school of music. USC Thornton currently enrolls 1,072 students from 40 countries, and its illustrious alumni and faculty have been awarded countless Grammy and Academy Awards and serve as leaders in all facets artistic, technical and business of the music industry.

Alan Pasqua, Chair of Jazz Studies, was born in New Jersey and began studying piano at the age of seven, playing both classical and jazz. He attended Indiana University and received his bachelor's degree in jazz studies from the New England Conservatory. His teachers at the time were Jaki Byard, Thad Jones, George Russell, David Baker and Gunther Schuller.

His career in L.A. broadened as he started playing with more rock and pop artists. He has performed in the bands of Eddie Money, Bob Dylan, and Santana. Some of his other album and touring credits include: Ray Charles, Joe Cocker, Ry Cooder, John Fogerty, Aretha Franklin, Sammy Hagar, Al Jarreau, Elton John, Queen Latifa, Graham Nash, Bob Seger, Rod Stewart, The Temptations, Joe Walsh, Dionne Warwick and Burt Bacharach. In the late 1980s, Pasqua teamed up with guitarist Dann Huff to form the rock band Giant. Their debut recording, Last of The Runaways, on A&M Records, contained several songs written by Pasqua, including the hit single, “I'll See You In My Dreams."

In addition, he has worked with composers John Williams, Quincy Jones, Dave Grusin, Jerry Goldsmith, Henry Mancini and Maurice Jarre on motion picture soundtracks. He is recognized as the co-composer of the CBS Evening News Theme, which has been airing nightly since 1987. Also, he composed the soundtrack for Disney's hit movie, The Waterboy, starring Adam Sandler.

He is also known for his contribution to jazz education, with a recently published book, The Diminished Cycle and The Architecture of Music. Pasqua has also been a co-leader of a trio with the legendary drummer Peter Erskine. The trio has released Live At Rocco and Badlands, both on the Fuzzy Music label. Both recordings have received critical acclaim. Body and Soul, a trio recording of his with Darek Oles, bass, and Peter Erskine, drums, followed as a Japanese release on the VideoArts label.

Recently, Alan has teamed up with his former Tony Williams Lifetime band mate Allan Holdsworth, and is co-leading a quartet that will feature Jimmy Haslip and Chad Wackerman. The band will revisit some of the original Tony Williams Lifetime material as well as play some new compositions. A live HD DVD recording, Live at Yoshi's was released in the spring of 2007. Pasqua's follow up release as a leader was entitled, “My New Old Friend", on the Crytogramophone label. The recording reached #15 on the National Jazz Charts, and has received much critical acclaim. This CD also features Peter Erskine and Darek Oles.

Some new original compositions by Alan are included on this recording, most notably, “Highway 14," which Kurt Elling recorded on his recent Concord release, Nightmoves. A brand new electric band recording, The Anti-Social Club, Cryptogramophone, was released in the fall of 2007. This CD features Nels Cline on guitar, Jimmy Haslip on bass, Alex Acuna playing percussion, Scott Amendola on drums, Jeff Ellwood on saxophones and Ambrose Akinmusire on trumpet. In 2008, Pasqua joined forces once again with Peter Erskine and Dave Carpenter, arranging, co-producing and playing on the Grammy Award nominated trio album Standards.