This music is informed by what I see in the news, the violence, the police, the politics. At the same time, we have to keep our chins up. I'm also looking at personal heroes, people who help me stay positive. 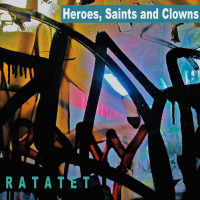 slideshow
San Francisco Bay Area drummer, composer, and bandleader Alan Hall turned to music when he found himself in the midst of what he describes as “some of the greatest turmoil our country has ever experienced.” In order to cope, he penned the sonic vignettes heard on his new CD Heroes, Saints and Clowns, set for June 22 release on Ridgeway Records. Performed by his genre-bending sextet Ratatet, which was formed in 2014 and made its recording debut in 2016 with the critically acclaimed album Arctic, the seven musical portraits reflect people who inspired, empowered, or infuriated him during today’s unsettling times.

“It’s just impossible to escape what’s going on these days,” says Hall, a native of San Jose and one of the West Coast’s premier drummers and music educators. “This music is informed by what I see in the news, the violence, the police, the politics. At the same time, we have to keep our chins up. I’m also looking at personal heroes, people who help me stay positive.”

Heroes, Saints and Clowns brings together an impressive set of improvisers, including Paul Hanson on tenor saxophone and bassoon (acoustic and with effects); Jeff Denson on double bass and five-string fretless electric bass; trombonist John Gove; Dillon Vado on vibraphone and percussion; and Greg Sankovich on piano, organ, and keyboards. They’re joined on several tracks by Oregon’s Paul McCandless on English horn and oboe, and cellist Joseph Hebert.

Together they use an electro-acoustic sonic palette to interpret a program of improvised and through-composed music ranging from the satirical to the sublime, from the serene to the disruptive. Hall, who blurs boundaries between composition and improvisation, uses his ensemble as a brush to paint musical portraits ranging from chamber jazz and tone poems to pieces with the moodiness of Mingus, the zaniness of Zappa, and the serialism of Stravinsky.

That Hall’s compositions lend themselves to being described in terms usually applied to the visual arts is not surprising given that he is a master of both the drum brush and the paint brush. Initially inspired by an exhibition of Alexander Calder sculptures he saw at the San Francisco Museum of Modern Art, Hall has become an accomplished visual artist who creates work under the name A. Miguel Hall. He uses individual and mixed media as well as digital abstract photography (the cover to Heroes, Saints and Clowns is one of his works). Hall honors the American abstract painter Agnes Martin with the through-composed piece named for her that closes the new album.

“It seems that, at any given time, one art form or the other—visual or musical—will demand expression, and the other must wait,” says Hall. “I can’t seem to be fully engaged with both simultaneously, which suggests they’re both drawing on the same source, whatever that may be. This is very interesting to me, but my goal is to have both fully activated at the same time.”

Part of a brilliant wave at Berklee College of Music in the late 1970s, Hall ended up teaching at the school from 1986 to 1993. A significant influence on Hall’s development as a musician was his two-year course of study (1983-1985) with drummer Alan Dawson, himself a longtime member of the Berklee faculty. While Dawson had left Berklee before Hall matriculated there, the younger drummer received tremendous guidance from Dawson not only in the area of jazz drumming but in the school of life as well.

“One thing about Alan was his devotion to the seriousness of the craft,” Hall shared in a 2016 interview with former student and fellow Bay Area drummer Niels Myrner. “His project was refining his craft to the highest level. That standard of excellence had a very strong impression on me.”

Moving back to California, he settled in the East Bay and started playing with Dave Eshelman’s Jazz Garden Big Band, which quickly established him as a first-call accompanist. Collaborating with veteran touring masters like Art Lande, Paul McCandless, and Rebecca Paris and younger stars such as Geoffrey Keezer and Ed Simon, Hall has provided the rhythmic foundation for more than a dozen leading ensembles over the past 25 years. A dedicated educator, he continues to teach at Cal State University East Bay, the Monterey Jazz Festival’s Summer Jazz Camp, the California Jazz Conservatory, and Jazz Camp West, as well as seeing private students.

Hall is thinking bigger and smaller with Ratatet, breaking out smaller lineups for particular pieces and adding new instrumentalists for others. He recently submitted a piece to NPR’s Tiny Desk contest which featured an octet with an acoustic guitarist and cellist added to the lineup. “There is so much more to explore with this group!” he says.

The Ratatet Octet—the same band featured on Hall’s Tiny Desk video—will be performing a CD release show at the Hillside Club, 2286 Cedar Street, Berkeley, on Saturday 7/7, 8:00 pm. A selection of paintings and photography by Hall will be exhibited and for sale during the concert. The Ratatet Sextet (with Sheldon Brown subbing for John Gove) is scheduled to play the San Jose Jazz Festival, Sunday 8/12 at 4pm, on the Gordon Biersch Stage.