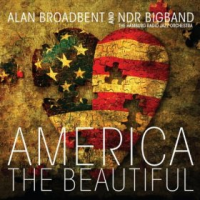 This year on Alan’s 67th birthday on April 23, 2014 his new album together with the NDR Bigband America the Beautiful will see the light of day.

The Title America the Beautiful is Alan’s way of giving thanks to the country and its people that gave him a life in music, an homage to the American spirit.

Broadbent is Diana Krall's conductor for her occasional orchestra concerts and is the conductor on her “Live in Paris" DVD. Recently he has been the arranger on Glenn Frey's cd with strings, “After Hours", and wrote six string arrangements for Sir Paul McCartney's Grammy winning album “Kisses On The Bottom" with the London Symphony. In his career he has released 15 albums under his own name, 4 of them have received Grammy nominations: in the years 2010, 2006 and 2005 for “best improvised jazz solo” and in 1997 for “best composition”. In 2010 he was nominated in the company of such artists as Herbie Hancock, Sonny Rollins and Keith Jarrett, and in 2011 the Los Angeles Times named Alan “one of the best living jazz pianists”.

In the early 90s he was asked to be a part of Natalie Cole's famous “Unforgettable" cd, at which time he toured as her pianist and, a little while later, as her conductor. At this time he wrote an orchestral arrangement for her second video with her dad, “When I Fall In Love", which won him his first Grammy for “best orchestral arrangement accompanying a vocal". Shortly after, he became a member of Charlie Haden's Quartet West, touring the festivals of Europe, UK and the USA. It was while with this group that he won his second Grammy, an orchestral accompaniment written for Shirley Horn of Leonard Bernstein's “Lonely Town".

When he left Woody Herman’s band in 1972, he left big bands for good. Well, he thought he had. But a few years ago, he got a couple of commissions that had him rethinking his feelings about big band music and his approach to writing it. For one thing, he needed an outlet for some tunes he had written over the years that Alan thinks have stood the test of time (at least his time). They have strong melodic and harmonic qualities and adapt well to his concept of big band music, which is that the band should behave like a small combo. Soloists improvise on the chord changes, with ensembles constructed simply on the form of the piece so that what ebbs and flows is always recognizable. Another reason was to address the problem of a pianist on the one hand and lots of brass on the other. He wanted to even the odds, giving each element its due. But what brought everything together was a commission for a program with the famous NDR big band. The individual members of the band, to him personalities all, in the best Duke Ellington sense, gave of themselves and made the music come alive as Alan heard it in his mind. Only better!

The NDR Big Band is a jazz band whose members are world class musicians and soloists, independent of their illustrious guest artists. While such jazz stars as Chet Baker, Al Jarreau, Bobby McFerrin, Carla Bley and the legendary Quincy Jones have been welcomed in a variety of musical encounters, the band performs the traditional big band concert repertoire, retaining it’s own impressive style and unique sound. The NDR Big Band has rightly earned its reputation throughout the world as one of the leading professional big bands working today. Since 2008, under the artistic direction of Jörg Achim Keller, the band has continued its pursuit of excellence. In 2013 it won the prestigious ECHO JAZZ AWARD for a production with Stefano Bollani, after having already received the 2010 American “Independent Music Award” in the category “Best Jazz Album” for their album with Omar Sosa.

Two CD release concerts for “America the Beautiful” are scheduled for Alan Broadbent and the NDR Bigband being part of the “NDR Jazzkonzerte” series: June 5 and 6, 2014 - Rolf-Liebermann-Studio, Oberstraße 120, 20149 Hamburg, Germany. In addition there will be an exclusive duo concert with bassist Phil Steen on June 7, 2014 at the Eden Riverside in Neuss, Germany.