Alain Marquet and His Jazz Museum 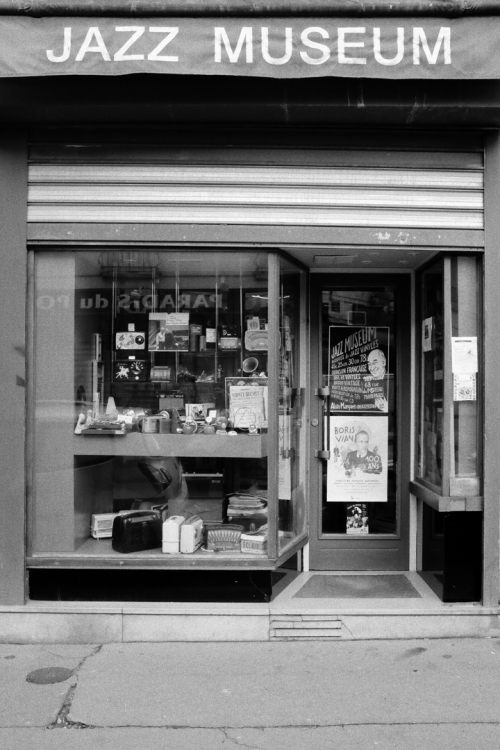 In Paris, after you've hiked up many flights of stairs to Montmartre and made your way to Sacré-Cœur, the basilica that overlooks the city, walk a little further. Along Rue du Poteau, you'll find one of the city's best kept jazz secrets. There, at No. 68, is a small shop called Jazz Museum, run by Alain Marquet. The oddly named store opened in 2009 and specializes in rare jazz recordings and artifacts.

I've never been to Jazz Museum and only learned about it recently from Parisian photographer Gilles D'Elia. Gilles frequents the store and was willing to pay a visit last week with his camera. Fortunately, Alain isn't camera shy. We may not be able to travel to Paris now, but thanks to Gilles, we can do the next best thing.

Here's Gilles on Jazz Museum and its swinging proprietor:

Marc, Alain is so in love with the records he owns that he often regrets selling them to customers. In other cases, he'll refuse to sell, and for good reason. His collection includes original first pressings by Bix Beiderbecke, Louis Armstrong, Duke Ellington and Django Reinhardt. In 2013, when the city of Paris asked Django's family for items they could include in the exhibit, “Django Reinhardt, Paris Swing," at the La Cité de la Musique, Django's family rushed to Jazz Museum to seek out material. Of course, Alain had plenty on hand.

Initially, Alain was just another avid jazz collector. Before long, his passion and collection grew so large that he ran out of room in his apartment. That's when he decided to rent space in his neighborhood. The storefront became something of a street-level attic, a cozy place where he could enjoy his collection. To bide his time while he listened to his records, Alain repaired old radios and 78-rpm record players—first for himself and then for musician friends. He knows plenty of them, since Alain is an excellent clarinetist. So much so that musicians who first came to see him at Jazz Museum to listen to his record collection began meeting to rehearse and play together.

Now Alain performs with bands, but above all he's an essential Parisian jazz character. On many nights, he can be heard in his shop playing the clarinet with friends. Whether the players are professionals or amateurs, it's a distinction Alain does not seem to make, which is good.

Over time, Jazz Museum began to attracted the attention of local residents. So Alain transformed his private jazz museum and meeting spot into an official shop. It is space reserved for insiders, those in the know. But the number of those in the know has grown steadily, since everyone he meets becomes a friend, and they tell others. Jazz Museum is undoubtedly one of the last places in Paris where jazz is still about rare recordings, the joy of an owner playing them for you and people pleading with him to let them buy what they just heard. Every trip is a discovery. [Photo above of Alain Marquet swinging away in his shop]