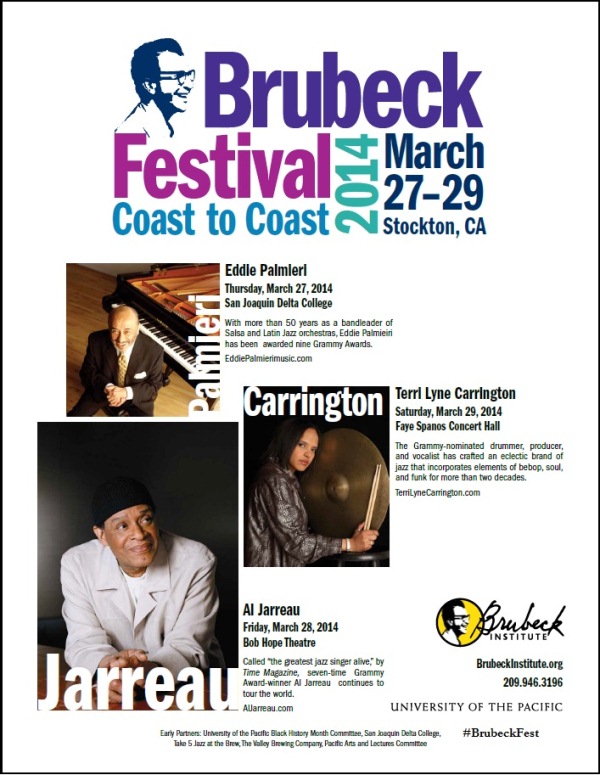 2014 Brubeck Festival: Coast to Coast also makes the cross-country connection to the April 7-13 Brubeck tribute at Jazz at Lincoln Center. That New York City celebration will include a six-month exhibit, “Dave Brubeck: Jazz Ambassador,” performances of new arrangements of Brubeck’s music by the Jazz at Lincoln Center Orchestra with Wynton Marsalis, performances by Brubeck’s sons, and current and past Brubeck Institute Jazz Quintet members.

Marsalis and the JALC Orchestra provided the featured performance at the Bob Hope Theatre in downtown Stockton during last year’s Brubeck Festival at University of the Pacific.

Rowe said the Jazz at Lincoln Center event was one of the last that Dave Brubeck helped organize. He died Dec. 5, 2012, a day shy of his 92nd birthday.

Jarreau, Palmieri and Carrington showcase some of the varied styles within jazz, from Jarreau’s distinctive vocals to Palmieri’s driving salsa and Latin beat to Carrington’s contemporary jazz. 2014 Brubeck Festival: Coast to Coast is expected to offer excellent coast-to-coast entertainment for all tastes.

Jarreau, whose unique style has won him seven Grammy Awards, will perform March 28 at the Bob Hope Theatre in downtown Stockton. Jarreau is a member of the Brubeck Institute Honorary Board and will take part in a free public symposium the following day at University of the Pacific.

“Dave Brubeck’s music has been important to me through my life and career, so I am proud to serve as an honorary board member for his Institute,” said Jarreau. “And now, to have the opportunity to perform my music at the annual gala, that’s fantastic. It will be a great weekend and I’m proud to be a part of it.”

The charismatic and boldly innovative Palmieri has spent more than 50 years as a bandleader of salsa and Latin jazz orchestras. He has won nine Grammy Awards and is certain to offer an energizing performance when his band plays March 27 at San Joaquin Delta College.

Percussionist Carrington, also a professor at Berklee College of Music in Boston, will lead her band for a March 29 performance at Faye Spanos Concert Hall. Her appearance is being co-sponsored by University of the Pacific’s Black History Month Committee.

“These three artists are examples of the kind of diversity we have in the world of jazz music,” said Rowe. “Dave Brubeck also championed diversity and the voice of the individual throughout his long career.”

But there is more to The Brubeck Festival than music and diversity. It is also a community event. Many of the events are low or no cost, while also bringing in visitor dollars.

“Events such as The Brubeck Festival are a boon for our community,” said Wes Rhea, CEO of the Stockton Convention and Visitor Bureau. “People attend the events and spend money at local bars and restaurants, hotels and motels, and get a very good image of the community and University of the Pacific. Local, community events such as The Brubeck Festival can only help boost the local economy.”

Tickets should be available by mid-November. Please visit BrubeckInstitute.org for upcoming ticket information and complete schedule.

About University of the Pacific’s Brubeck Institute