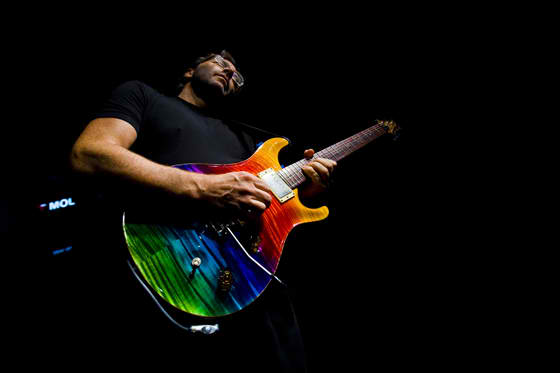 It's a small wonder that Al Di Meola isn't a major player in the jam scene. His pioneering work while just 20-years-old in Return To Forever alone should bestow the same elder statesman status as John Scofield and other electric jazz and fusion groundbreakers enjoy. Perhaps it's because Di Meola has cut his own swath through the music world since the beginning, never teaming up with anyone for anything other than musical reasons and never courting easy favor in the ways some of his peers have. No, for Di Meola there is the music in his head and heart and that is what he must follow, for good or bad, often frustrating those fans that would have him shred guitar like in his early days to the exception of everything else.

Di Meola's latest effort with his World Sinfonia, Pursuit of Radical Rhapsody (released March 15 on Telarc) is one of the strongest in a career that stretches widely and admirably over close to four decades. Within this song cycle one finds romance, playful expression, serious intent and one of the finest mixtures of electric and acoustic instrumentation yet mustered by this veteran player-composer. Facile descriptions may lump Radical Rhapsody into the world music pile but more careful listening reveals a tunesmith who simply won't be confined by geographic or stylistic boundaries. And the man still works the strings like almost no one else, fleet and daring and combining elements that simply wouldn't occur to a lesser musician. His crack, road tested band keeps pace with him throughout an album that could be great jumping-in point for jam kids looking to add some subtlety and sophistication to their listening.

We had the great privilege of speaking with Di Meola about his newest chapter, his history in Return To Forever and the fusion world, the influence of Astor Piazzolla and more.

JamBase: The new record is very accessible but it also rewards one's study by offering layers to explore. Perhaps a good layer to begin with is the title. What is the pursuit of radical rhapsody?

Al Di Meola: I was on such a long journey to find a title that was appropriate or clever mixed with appropriate. I think it's kind of cool because [the album] is about finding a middle ground between appealing to serious guitarist fan and a more widely appealing aesthetic. And I think we've done that.

JamBase: I think you're correct in identifying that split in your career. Some of the music you've made has been for the hardcore guitar/music heads, and other music has been for a more general public. Pursuit of Radical Rhapsody strikes a nice balance between these two halves of your creativity.