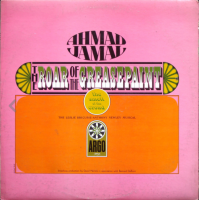 slideshow
When Leslie Bricusse and Anthony Newley's musical The Roar of the Greasepaint — the Smell of the Crowd hit Broadway in 1965, it was a followup to their collaboration on Stop the World — I Want to Get Off (1962). The earlier musical gave us two massive pop standards: Once in a Lifetime and What Kind of Fool Am I, with two lesser hits: Someone Nice Like You and Gonna Build a Mountain. A year later, the massive jazz standards that came out of Greasepaint were Who Can I Turn To, A Wonderful Day Like Today and Feeling Good, with a minor hit in The Joker. Who Can I Turn To would be covered by dozens of pop singers and jazz instrumentalists.

Greasepaint opened in London in August 1964 and then at Broadway's Shubert Theatre in May 1965. Two artists who devoted albums to jazz interpretations of the entire show were Ahmad Jamal and Herbie Mann. Interestingly, the former recorded his in February 1965 and Herbie Mann's was recorded in March. Both were done before the show even opened in New York.

That's because of a brilliant marketing campaign. Though the English production never made it to London's West End, American producer David Merrick saw the show in Liverpool and decided it was cost-efficient enough to bring to the States. He not only started out with a pre-Broadway tour of the U.S. with Anthony Newley in the lead role but also convinced every record label he could reach to record versions of the show's songs, particularly Who Can I Turn To. Tony Bennett's signature version came out in November 1964, months before the musical opened on Broadway.

Ahmad Jamal's album, The Roar of the Greasepaint—The Smell of the Crowd, was recorded for the Argo label and was produced by Esmond Edwards, with liner notes by Nat Hentoff. Jamal was joined by Jamil Nasser on bass and Chuck Lampkin on drums. The songs weren't organized on the album in which they appear in the show, adding a randomness to them.

Each song is treated to Jamal's elegant keyboard approach, leaving lots of space in his right hand. This Dream is a good example of Jamal's style. The same goes for Who Can I Turn To, which features an unusual bossa nova beat. And on A Wonderful Day Like Today, Jamal intermingles block chords, a robust left hand and runwaway lines in the right high up on the keyboard.

There's little interaction between jazz and Broadway these days. Part of the reason for their separation, I suppose, is that Broadway musical numbers no longer carry the commercial punch they once did. In the old days, singers like Tony, Andy Williams, Nancy Wilson and Sammy Davis Jr. could record Broadway songs in advance of the musical's opening, turning them into standards ad drive audiences to the theater. Today, too few musicals feature songs with such lyricism. For example, I don't believe a single jazz artist has taken on Hamilton's score. And maybe for good reason. As successful as the show has been, I'm not sure anyone walks around trying to shake the show's songs from their head.

JazzWax tracks: Sadly, Greasepaint by Ahmad Jamal never made it into the digital format and is today woefully out of print.