This three-piece band pursues a style both hypnotic and rough-and-tumble, drawing freely from the saxophone-trio playbook but guarding its independence. The members of the group--the saxophonist Ben Wendel, the bassist Harish Raghavan and the drummer Nate Wood--are all members of Kneebody, a larger, hazier band, but one that upholds similar convictions. --Nate Chinen, The New York Times 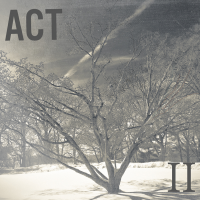 “It only takes a few minutes of this debut to clarify just how rousing the group can be... the kind of propulsion that a sax trio needs to grab a listener's lapels." —Jim Macnie, DownBeat Magazine

“The trio is having fun, enjoy being with each other, digging into the songs... creative music that demands you pay attention but pays the attentive listener back by being honest. Can't ask for more than that." —Richard Kamins, The Hartford Courant, Step Tempest, AllAboutJazz

The sophomore recording from ACT, ACT II, aligns the orbits of three of the most creative forces in our vast galaxy of music, Ben Wendel (tenor saxophone, melodica, bassoon), Harish Raghavan (bass), and Nate Wood (drums). These musicians are supremely talented, that is a given. What is fascinating and gripping is the level of their creativity, and their ability to fully express their individuality while complimenting each other. Their new recording ACT II, fulfills one's need to hear imaginative, adventurous music, and also stands as a shining example of what it means to play selflessly in a trio setting (albeit one with a distinct instrumentation); they are that in tune and sympathetic to one another, and together they conjure up another winner with this recording.

Ben, Harish and Nate, long-time friends and collaborators, have known each other for quite some time, and have found themselves side by side in many other groups (most notably - Kneebody, with trumpeter/composer Shane Endsley). Collectively they have appeared with Ignacio Berroa, Chaka Khan, Greg Osby, Vijay Iyer, Wayne Krantz, Daedelus, Billy Childs, Ambrose Akinmusire, Eric Harland, Mark Turner, and numerous others. Despite this plethora of outside opportunities, Ben, Harish and Nate feel an enticing lure to perform and record as this compelling trio. Wendel explains, “we've always had a great time as a trio and this group has always felt like the no pressure/just-for-the-fun-of-it project. After we recorded our first album years ago, we always assumed we would document the group again in the future. For me, it's great to keep coming back to this group and see how things have changed over the years." With the release of ACT II, the trio moves to the head of the queue as one of the most exciting bands on the scene.

ACT II was recorded at The Pocantico Center/Rockefeller Brothers Fund, in Tarrytown, NY (a connection made possible by Rio from The Jazz Gallery in NYC). “In the dead of winter, we stayed in a beautiful home upstate and recorded/composed for three days to make this album-it was a total blast," said Wendel. “This record, along with our first, was recorded in one room with no headphones. It's a very liberating way to record music as it gives the band a natural blend, and the recording space becomes a phantom band member. It adds to the familiarity of our musical relationship, and makes it very easy to make full sounding music with just 3 people and no chordal component", said Wood. Raghavan added that, “recording this CD was a unique experience; going to a random house, not knowing what the space would sound like, writing, and arranging and recording the record in three days. It was crazy, but also inspiring, and we did every tune in one or two takes. Something about the atmosphere was comforting, or maybe it was the band. Playing with Ben and Nate is and has always been very natural. We've played together for almost a decade, and months, even years, can pass between gigs, but there's always a familiarity that's inspiring." Highlights on the recording include “Unforeseeable", originally a duet for saxophone and trumpet that was to be included in Wendel's acclaimed “Seasons Project" but didn't end up getting used. It sounds tailor-made for the trio, and Nate and Harish relish in the driving, up-tempo groove in five. “Yes You" “is a new tune that I've been trying a bit in Kneebody and thought would fit well in this group," explained Wendel. With “Day and Night" we find a loose adaptation of the standard “Night and Day"; a riveting departure that has just enough of the original's elements to tease the ear and move the soul.

As a composer, he has received an ASCAP Jazz Composer Award, the 2008 and 2011 Chamber Music America “New Works Grant” and most recently was awarded the Victor Lynch-Staunton award by the Canada Council For The Arts. He also co-wrote the score for John Krasinski’s 2009 adaptation of David Foster Wallace’s “Brief Interviews With Hideous Men." Ben was honored to work with conductor Kent Nagano in producing a series of concerts for the Festspiel Plus in Munich, Germany. Since 2008, he has produced a multi-genre performance series at the Broad Stage in Santa Monica, California. Recently he was appointed the head of their Jazz and Blues initiative, which will include producing and expanding performance opportunities for these genres in Los Angeles. As part of this appointment, Ben helped to create an artistic council with includes such luminaries as Quincy Jones, Herb Alpert and Luciana Souza. Ben’s recent producer work includes the Grammy nominated album Life Forum for pianist Gerald Clayton on Concord Records. Ben is a recording artist with Sunnyside Records and Concord Records, with two solo albums under his belt, Simple Song (2009) and Frame (2012), a duo project with French-American pianist Dan Tepfer entitled Small Constructions (2013) and multiple Kneebody albums. A third solo album is planned for release in 2015. Ben is a former Adjunct Professor of Jazz Studies at USC and a current Adjunct at the New School in NYC.

Educational outreach has been a constant in his career with over 250 masterclasses at various colleges, universities, high schools and also previous work with the LA Philharmonic Artist Program. Ben had the honor of conducting a re-creation of “Bird With Strings” at Jazz At The Lincoln Center with guests Charles McPherson and Wes “Warm Daddy” Anderson.

Harish Raghavan grew up in Northbrook, Illinois. At age 8 he began studying Western and Indian percussion, and switched over to the double bass at 17. He was accepted to study double bass at the University of Southern California. Since moving to New York City he has quickly become a rising star on his instrument.

Grammy nominated Nate Wood is a drummer/multi-instrumentalist and mastering engineer based in New York City. He is a founding member of the Grammy nominated quintet Kneebody, which released their self-titled debut album in 2005 on trumpeter Dave Douglas’s label, Greenleaf Music. In 2007, Kneebody released Low Electrical Worker on Colortone Media. They also completed an album of arrangements of Charles Ives compositions with singer Theo Bleckmann and released the recording 12 Songs of Charles Ives which was nominated for a Grammy for “Best Classical Crossover Album”. Kneebody’s latest record The Line was released on Concord Records in 2013.

In addition to Kneebody, Nate has also performed or recorded with many notable artists including Taylor Hawkins and the Coattail Riders, Dave Grohl, Brian May and Roger Taylor (Queen), Chris Squire (Yes), Elliot Easton (The Cars), Chaka Khan, Wayne Krantz, Billy Childs, Tigran Hamasyan, Donny McCaslin, Sting and many others. Nate was featured in Modern Drummer in March of 2014, and placed in the 2015 Modern Drummer Magazine reader’s poll among the top 5 drummers in his category.

Along with his work as a sideman, Nate has released 3 albums of his own material, where he performed, recorded and mixed everything himself. His newest album Another Time was released in July 2014. Nate also masters records for artists from around the world. Nate is endorsed by Gretsch Drums, Istanbul Agop Cymbals, Promark Sticks, Remo Drumheads, Gibraltar Hardware, D’addario Strings, Aguilar Amplification and Moollon instruments.