Acclaimed Vocalist Rebecca Kilgore Returns to Feinstein's in "Some Like It Hot: the Music of Marilyn Monroe" 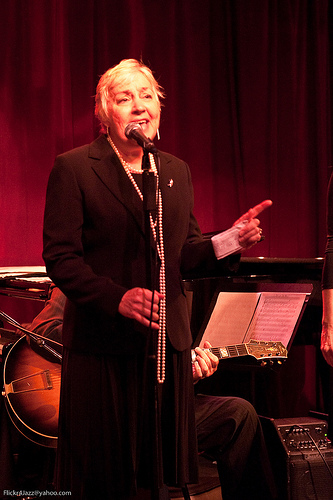 slideshow
FEINSTEIN'S AT LOEWS REGENCY, the nightclub proclaimed “Best of New York" by New York Magazine and “an invaluable New York institution" by The New York Post will continue its Summer 2011 season with the return of jazz vocalist REBECCA KILGORE in her new show “Some Like It Hot—The Music of Marilyn Monroe." She will be joined by The Harry Allen Quartet which features Allen on the tenor saxophone, Rossano Sportiello on piano, Joel Forbes on bass, and Chuck Riggs on drums. They perform selections from Monroe's famed Hollywood films including “Diamonds Are A Girl's Best Friend," “Let's Make Love," and “Runnin' Wild." “Some Like It Hot—The Music of Marilyn Monroe" runs at the Loews Regency Hotel (540 Park Avenue at 61st Street) from August 9㬉.

REBECCA KILGORE is one of America's leading song stylists intent on preserving the vocal jazz of the 30s and 40s, an era which she feels remains unsurpassed in its high-quality songwriting and heartfelt lyrics. She regularly performs worldwide at jazz festivals, jazz parties, and on jazz cruises. She is a frequent guest on National Public Radio's “Fresh Air" with Terry Gross, has appeared on “A Prairie Home Companion," and with Michael Feinstein at Carnegie Hall.

Kilgore has performed around the country at venues like The Plush Room in San Francisco, CA; The Jazz Bakery in Culver City, CA; The Concorde Club in Southampton, UK; Murphy's Place in Toledo, OH; and The Firefly Club Ann Arbor, MI. In 2010 she was honored to have been inducted to the Oregon Music Hall of Fame and to the Jazz Society of Oregon's Hall Of Fame, and to have been invited to perform at New York's Mabel Mercer Cabaret Convention for two consecutive years at Town Hall and Lincoln Center. She hosts “The Singers Voice," her own radio show for KMDH 89.1 FM, Oregon Public Broadcasting, www.kmhd.org.

Her many recordings include the recently released Live at Feinstein's at Loews Regency, which celebrates the musical collaboration of Billie Holliday and Lester Young." In The New York Times, Stephen Holden called the show “a sexy, lighthearted dance" and Ms. Kilgore “a wonderfully fluent jazz stylist with clear enunciation who exudes a serene mastery of phrasing." She also recently collaborated with acclaimed jazz guitarist-vocalist, John Pizzarelli, for her album Lovefest at the Pizzarelli Party.

FEINSTEIN'S AT LOEWS REGENCY will present REBECCA KILGORE from Tuesday, August 9 through Saturday August 13 at 8:30 PM. All performances have a $30.00 cover with $50.00 premium seats available, in addition to a $25.00 food and beverage minimum. Jackets are suggested but not required. The club is located at 540 Park Avenue at 61st Street in New York City. For ticket reservations and club information, please call (212) 339-4095 or visit us online at Feinsteinsatloewsregency.com and TicketWeb.com.