She’s as great a storyteller as she is a singer, and you hear it in every note... powerfully expressive. --San Francisco Chronicle 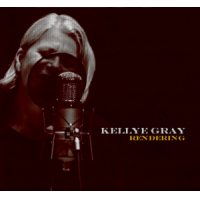 Raves are pouring in for Gray’s Rendering. According to the San Francisco Chronicle, “She’s as great a storyteller as she is a singer, and you hear it in every note... powerfully expressive.“ Jazz Mostly calls her album, “hugely entertaining,“ while Cabaret Scenes says, “Palpable four-octave-range vocals emanate from someplace soulful and physically deep… Ms. Gray is a find.”

Gray has had a long and rewarding career. A singer with a powerful voice and a nearly four-octave range, she’s toured extensively across the country and around the world, sharing the stage with some of the top names in music. She’s also recorded over seven albums as a leader. Her first recording, Standards in Gray, was released 25 years ago. It received rave reviews and extensive airplay, and it launched a career that remains unabated today. Her new CD, Rendering, is currently receiving wide national jazz radio airplay and critical acclaim in the press. All About Jazz muses, “She is the complete package, from beginning to end. What emerges on Rendering is maturity, poise, and accomplishment. It is nothing short of a divine revelation.”

Whatever Gray sings, whether they’re tunes inspired by Billie Holiday like “Don’t Explain” and “Good Morning Heartache,” or a bossa, as in “How Insensitive,” or an intimate ballad like the Shirley Horn-inspired “A Time For Love,” her powerful voice, sensuous tone, and creative approach shine through. Gray is a unique talent on the jazz scene, and Rendering is a testament to the continued growth of an artist who is already at the top of her game. Performing with Ms. Gray are several players on the recording, including Pamela York, piano; David Craig, bass; Daniel Dufour, drums and Warren Sneed, saxophone.