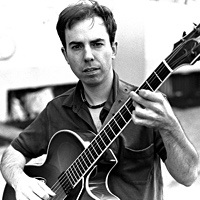 Armed with an “impressive debut recording, broad in scope, deep in concept and eminently listenable,” guitarist/banjoist Nick Russo burst onto the scene eleven years ago with rave reviews from All About Jazz, DownBeat, Jazz Times, Jazziz, EJazz News, and Hot House.

With this year marking the 11th anniversary of Ro featuring Nick Russo +11, the Jalopy Theatre & School of Music in Brooklyn, NY, is providing a fertile atmosphere for a special evening of aural transformation. Playing the album in its entirety, several of the original musicians will join Russo, including Hoenig, Griffith, Glassman, Peck, and Chatterjee. Special guest Dan Aran, on drums, is confirmed to join the journey with more to be announced in the coming weeks.

“Keep and eye out and an ear open for Nick Russo. He is a guitarist with original ideas, which comes as a rarity these days.”— All About Jazz

“A fluid straight ahead player with a globalist outlook, Nick Russo cultivates a wonderfully pure jazz tone on his self-released album Ro.”—Jazz Times

“Russo's tone is very near perfect – big and bold, but still subtle, very full in the line of players like Jim Hall, Kenny Burrell, and Tal Farlow.”—Vintage Guitar

“Russo gets most inventive when building from disparate materials, especially on “Little Hands,” whose Indian flavor proves hospitable to Russo’s banjo, and “Please Come Home.”—DownBeat

“Russo has a perfect sense of both harmonic and melodic artistry… [he] deals in a realm of strikingly beautiful sonorities and dazzling color as well as glittering shade and delicate tones. Unique… Singular… Compelling…”—EJazz News